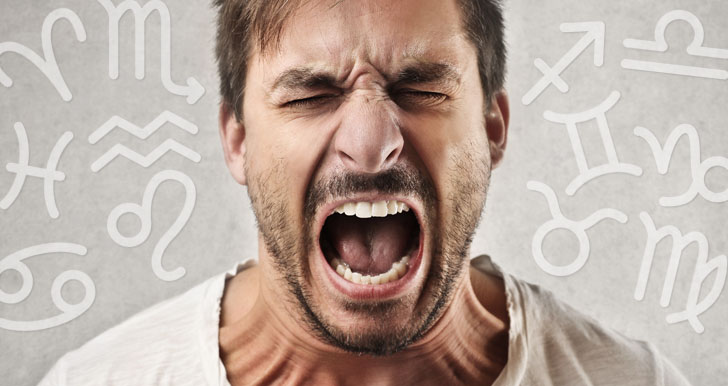 Fire signs such as Aries and Leo are notorious for their fierce tempers. However, anger and angry outbursts are not exclusive to the fire signs. Every zodiac sign has some rage in them, it is just a question of what triggers it and to what degree. Here is a rundown of the things that anger each zodiac sign the most.

Aries are proud and assertive people who express themselves with authenticity and candor. They expect this from others as well and being the keen and perceptive people they are, possess a special radar for spotting and seeing through disingenuous facades. Fake people are seen as cowardly, but the charade is also taken as an insult to Aries’ intelligence because of the implication that they could be taken for a fool. An Aries will have little patience for this and will find it hard to resist the urge to humiliate and expose such people and subject them to public ridicule. In addition, Aries is the most impatient of all the zodiac signs and nothing triggers them more frequently than a jam in their plans. Stalls and delays of all kinds frustrate their need to accomplish and make progress. When their expectations are not met the ensuing outburst can be devastating.

Taurus people know quality when they see it, hear it, smell it, feel it, or taste it. Taurus’ sensual sophistication is manifest in their refined tastes and preferences. Shoddy service, and cheap materials and ingredients are among the things that will offend Taurus’ standards and sensibilities. They are good at judging the value of things, and anyone who tries to scam or cheat them is bound to invoke the wrath of the raging bull. Fortunately, Taurus is not as quick to anger as Aries, because when they do lose their temper, it can be a substantial spectacle.

Gemini is typically an upbeat and non-malicious sign. While they can be two-faced and inconsistent at times, they are generally not one to rain on other people’s parades. On the contrary, they are often enthusiastic and jubilant cheerleaders of friends and family and tend to carry positive energy that earns them popularity and social esteem. Even though Geminis love people, they have no time for sour pusses and salty crabs. Haters and hypercritical people will fall back when Gemini snaps, because their way with words is unmatched. Few can insult and verbally accost as wittily and creatively as a Gemini can and afterwards, a petty naysayer will likely regret opening their mouth.

Cancerians are kind of territorial people. They take their relationships seriously and they expect anyone they’ve let inside they’re inner circle to be loyal and trustworthy. Cancer people will stick up for, defend and protect their loved ones to the ends of the earth and are very generous, caring and nurturing of them. They expect their people to reciprocate more or less but woe to him/her who commits treachery! Hell hath no fury like a Cancer scorned. Just look at O.J. Simpson and Jodi Arias (both Cancers born July 9) and what they did. Cancer’s are over represented in crimes of passion so you might want to be upfront with them and give full disclosure before trying to screw them over. It might save your life.

Leos are unapologetically confident and often pompous individuals. This type of grandiose bombasity can either engender admiration by others or contempt. Leos crave attention but when they receive it, they are genuinely magnanimous and warm in return. People who feel threatened by a Leo are often not comfortable with themselves. Leos are naturally compelled to be at the forefront in some capacity and will not tolerate insecure haters trying to steal their thunder. Beneath their superficial grandiosity, is a noble persona and the righteous wrath of an angry lion king is not something you’ll want to be on the receiving end of.

Virgo is modest and shy and yet they are very opinionated and judgemental. They are particularly critical of people who showboat and they may be the type of people who would hate on a Leo. Even though Virgoans are not inclined to express their anger in spectacular outbursts like an Aries or Taurus might, they will definitely make a fuss about it and crank up the passive aggression levels to the max. They will instinctively try to throw water on someone’s fire and knock them off their high horse just to bring their confidence levels down to size.

Libras love harmony and when discord arises they instantly scramble to smooth things over. They are the social butterflies of the zodiac and they know the formula that makes people like them. Smiles + friendliness + confidence + wittiness = charisma. Their charm is their bread and butter, their social currency to get what they want: status, money, sex. Dressing nice and physical attractiveness are part the equation too, but that’s besides the point. Libras are actually genuinely nice people, and rude people violate their perfect little world of harmony and agreeableness. Disharmony destabilizes Libra’s emotional balance and will invoke their charming fury until they can restore world order again.

Scorpio is not a sign to be crossed or screwed over and lying to them is definitely a bad idea. Scorpios have trust issues as it is and if someone attempts to lie to them, chances are it will come back to burn them. The shrewd judges of character they are, Scorpios can detect untruths and deception like a sixth sense. When a Scorpio knows they’ve been lied to, there is no telling what lengths they’ll go to exact revenge, because revenge and retribution are their middle names.

Sagittarians are not known for mincing words. Although friendly and humorous, they are blunt to a fault and require the freedom to express themselves honestly and with authenticity. Any attempts to censure them will likely arouse their rebellious temper. Sagittarius is the broad minded philosopher of the zodiac and Political correctness to them serves as a nuisance and an impediment to honest epistemological discussion. Mark Twain and Ann Coulter are solid examples of the bold sagittarian unorthodoxy.

Capricorns are the workhorses of the zodiac. They’ll put in over-time all the time and let their home life wither to nothing. They’re disciplined, reserved and responsible so naturally, inanition and slothfulness is liable to irritate them especially when it’s done at their expense. Team members or employees who don’t pull their weight are liable to invoke the harsh criticism of a Capricorn. Capricorns don’t respect moochers and loafers and if they sense that they are being exploited or used by one they are capable of going over the top with their fury.

As the rebel and inventor of the zodiac, it is no surprise that Aquarius is not a fan of restrictions and suffocating authority. Aquarius is also weird and superstitious which probably contributes to their paranoid tendencies and irrational fears. Aquarians are highly independent and self sufficient and they prize their freedom above all else. Any attempt to limit or constrain them will be perceived as a threat against which they will fight with both tooth and nail until their dying breath. They will not accept a denial of their sovereign liberties because death is better than that.

Pisces are sensitive souls and they are prone to depression and emotionally dire straits. Because they live in a murky haze of fantasy and idealism, they often lack an objective perspective of themselves and their self image. However, there are plenty of individuals who will not hesitate to share their opinions and many of those opinions will be like pins piercing the Pisces’ idyllic balloons. Initially this may send Pisces into a downward spiral during which, Pisces will wallow in self-pity. But, if it happens enough times, the despair will turn to fury and eventually they will learn to fight back and may do so with startling volatility! After all, it’s been said that at the center of all anger, is a person who’s been deeply hurt.