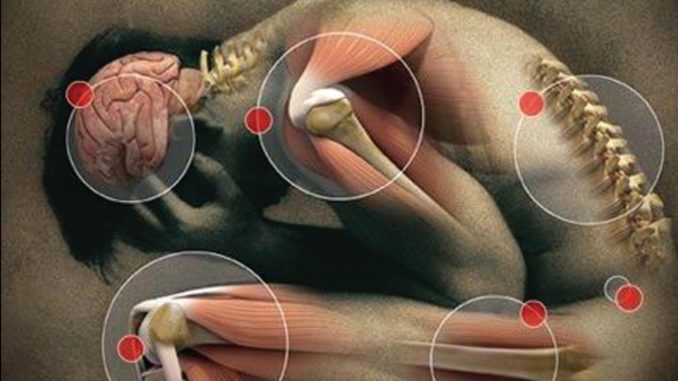 Hips represent decisions in Life, especially decisions about moving forward. Pain in the hips is a sign of being ‘stuck’, unable to make a decision or see clearly what is needed to be done next.

The process of walking requires that we first thrust the hip forward and the leg etc. follows. This is actually, an act of faith on our part since we are quite literally initiating a fall to the ground and trusting that our legs will save us.

Hips represent the idea that the next step in your life is important. Pain or discomfort advises you to slow down or stop, look around, buy a map, or ask someone for directions.

Thighs are the link between the Hips & decisions, and the Knees & pride. Very often, when we have made a decision and take the next step, Pride gets in the way. “What if I look stupid? What if it’s not right? What if it doesn’t work out?”

Our knees lock up or turn to jelly, and we are prevented from moving forward. The pain that begins in the Hips and shoots down the Thigh (Sciatic Nerve), is the separation from our desire and decision to move forward and our Fear of falling flat on our ass.

Knees represent Pride. In spiritual practice, it is suggested that one must go down before one can rise up, as Jesus did before John the Baptist, before taking up his own ministry.

Pride or Ego keeps us from surrendering to the Will of God or the Universe. In practice, every time we move forward in Life or approach change, we approach the unknown. We may feel vulnerable or unsure. We may stand still, stiff-kneed resisting the winds of change.

It is interesting to note that stiff, sore knees are a symptom of Kidney deficiency, whose emotion is Fear. Rather than admit our fear, we resist it until it overwhelms us. While knees represent Pride, and it is said that ‘Pride goes before the fall’, knees can also represent Humility which is the wisdom to be yielding in the face of change.

Briefly, Knee problems may be said to indicate being stuck in the Ego, too proud to bend. Louise Hay also suggests that Knees represent Pride and the Ego.

The Shins represent another weak link. Although the Shins are mostly bone, the hardest substance in the body, the Shins are actually quite sensitive and brittle. A slight whack on the Shins is not only painful, it weakens the entire body and stops it cold.

When we have organized ourselves to move forward, to take the next step towards the goal we have set, and are in the process of taking it, something comes along and sends you tumbling. It is something we trip over because we don’t see it, even though it is right there in front of us.

In ancient times the shin pads that worriers wore were called greaves. Very often what trips us up is something, the loss of which we haven’t properly grieved. Moving forward always means something gets left behind.

Interesting to note is that the three Yin channels of the foot all crisscross at Spleen 6 (Sanyinjiao), representing a confluence of Worry, Anger, and Fear.

Moving forward is often marked by a jumble of emotional responses which need to be sorted out, especially if we are resisting it. Louise Hay suggests that problems are fear of the future; not wanting to move ahead.

Ankles represent flexibility, which is important as one navigates the twists and turns of Life. Stiff, painful ankles mean that change is difficult for you.

Maybe you are one who digs in your heels and resists moving forward. The more Life forces change upon you, the deeper you dig in. A broken ankle is a good sign to develop some flexibility in your Life. Louise Hay suggests that ankles represent mobility and direction.

While it is legs that carry us forward into Life, it is the feet that actually make contact with the ground and can stop any advance, or at least make it difficult.

In modern society with its asphalt, concrete and High Rises, we lose touch with the Earth and its energies. This may be reflected in our relationship to the one who gave birth to us. Separation can cause real pain.

All the Leg Yin & Yang channels meet and flow into each other in the toes. This is an area of high energy and strong effect on the body. This is an area where strong energies are in transition, so our contact with Mothers, Mother Earth, and our base energies is always ambivalent. We want to draw closer to that love, but at the same time move away from our own course.

In my experience, the feet often store toxic energies (as often to do with grief or resentments as not), as far away from the Heart as possible. This means, in the feet, often there are issues that go all the way back to childhood. Lacking the tools to effectively release grief or resentment the body stores it, like it stores fat.

Over time, more and more toxic energies are stored here and fill up the receptacle. In many cases, the entire leg can become involved and the waste starts leaking back into the system. This is a very serious situation indeed, that can lead to amputations, blood disorders, and even death, as the body struggles to protect the Heart.

Metaphysically, it becomes clear that the space you are standing in is painful. The key is to move on. Stop dwelling on the past, release or transform whatever it is that keeps you emotionally standing still. Louise Hay suggests that feet represent our understanding of ourselves, of Life, and others and toes represent minor details of the future.

The Throat represents our Will, and our ability to communicate, both with others and with ourselves. Sore throats, lumps in the throat, tumors all represent difficulties in saying what we want to say.

Lumps, both physical tumors and those that are non-manifest (Hystericus Globus) are our willful attempts to block free expression of emotion and of our identity. The Throat is another one of those weak links that can seduce or sabotage you from your path.

The Throat is the channel between the Head and the Heart. In Chinese Medicine, it is said the Heart houses the Mind, especially in its connection with the emotion of Joy and the expression of Love for ourselves and for others.

Where this comes from is all the things you have not said over the years that get stuck in the throat, needing to get out, and out they come, one way or the other.

Problems indicate an inability to speak up for one’s self, swallowed anger, stifled creativity and refusal to change. Thyroid problems indicate difficulty in analyzing, digesting and assimilating the communication between the Head and the Heart.

The chest area represents the Feminine principal of nurturing and nourishing the connection with the ‘breath of Life’ as it flows through the Lungs. In men, pain or discomfort, not associated with any organ or vessel represents a disconnection from the Feminine Principle.

In Chinese Medicine, the front is considered Yin. The chest is the confluence of the three most important kinds of Qi, that nourish the body; Zhong Qi, from the Lungs, Jing Qi, from the Spleen, and Yuan Qi from the Kidneys.

Breast problems represent a denial of the Mother/feminine principal to nourish the self and to nourish others. Louise Hay suggests also that the breasts represent mothering and nurturing. Cysts, lumps etc. represents over mothering.

Is said to the be the seat of the Ego and Individuation. Some call this the Negative Ego. In general, this area represents the conflicts in your life.

The stomach represents digestion, not only of food and physical nutrients, but of new ideas, new ways of doing things, and accepting a change of any kind.

The Stomach is nothing more than a big flexible bag of muscle whose job it is to ripen and rot whatever is put into it. That is, its job is to break down what is put into it into a form that the body can deal with. This it does by adding Hydrochloric Acid, Hormones, Enzymes and Bile which reduces every sold morsel into an undifferentiated mass called Chyme.

Simultaneously it rocks back and forth swishing and swilling this mess until it is liquefied and able to pass through the small Pyloric Valve into the Small Intestine where the actual absorption of nutrients mostly takes place. Metaphysically, when we come upon a new idea or a new way of doing things, the process is similar.

First, we must swallow the idea, either whole or in handy bite-sized morsels, break it down into a form we can handle and finally absorb that which we need to nourish ourselves. In the same way that a bad diet poisons the body, toxic ideas, suppressed emotions and resistance to change can have a poisoning effect.

In traditional Chinese Medicine, long-standing emotional disharmony is seen as a primary cause of disease. Strengthening the Spleen/Stomach which between them are responsible for transforming food and water into Qi, and transporting it throughout the body, is seen as a key strategy to deal with almost any disease.

Metaphysically we need to nourish ourselves every day, just as we need to eat nourishing foods. Just as the physical body needs nourishment to grow and carry on its day to day activities, so do the Emotional, Mental, and Spiritual bodies.

Metaphysically, ‘wellness’ is not accomplished by a change in diet alone. Louise Hay suggests that the stomach holds nourishment, digests ideas. Problems indicate dread, fear of the new, and an inability to assimilate the new.