Home
Astrology
7 For 2017: Here Is What Nostradamus Predicted About 2017 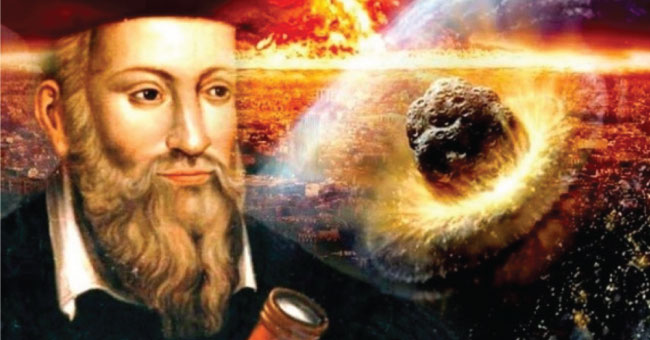 Nostradamus prophecies have baffled experts down the ages with their astonishing accuracy – and as 2017 dawns we look at what the fabled sooth sayer has in store for us this year.

He would stare into a bowl with water and while staring at the water for some time he would “receive” visions of the future.

Nostradamus – as he is famously known– began to have visions at a very early age.

He writes more than a thousand four-line poetic verses called “quatrains,” verses that seem to predict the future.

According to his followers, and numerous historians, the French apothecary managed to predict a lot of things that have actually happened in the last few centuries; including the French Revolution, Adolf Hitler’s rise to power and 9/11.Not only that, it is believed that the 16th-century prophet even managed to predict Trump’s presidential win: “The great shameless, audacious bawler. He will be elected governor of the army: The boldness of his contention. The bridge broken, the city faint from fear.”

Recommended: Your Personal Year Number for 2017 and the Energy it Brings for You

However, it is important to note that his prophecies, which he wrote in four-line verse, are greatly open to interpretation and many people claim that nearly all of his past ‘accurate’ predictions are nothing more than modern misinterpretations. Interestingly, there are those who argue that there are some verses that could possibly shed a little light on what we can expect this year. Let’s take a look at 7 for 2017:

For forty years the rainbow will not be seen.

For forty years it will be seen every day.

and there will be great floods when it is seen.

The great man will be struck down in the day by a thunderbolt.

An evil deed, foretold by the bearer of a petition.

According to the prediction another falls at night time.

Conflict at Reims, London, and pestilence in Tuscany.

3. A battle at sunset

A great nation is uncertain.

the bridge and the grave both in foreign places.

Recommended: Your 2017 Horoscope is Here, It is Said To Be So Accurate, It’s SCARY!

for a long time the lands will be inhabited peacefully.

People will travel safely through the sky (over) land and seas:

then wars will start up again.

Letters are found in the queen’s chests,

no signature and no name of the author.

The ruse will conceal the offers;

so that they do not know who the lover is.

6. A weird version of Animal Farm

A fox will be elected without speaking one word,

afterwards he will suddenly become a tyrant

putting his foot on the throats of the greatest men.

Twice put up and twice cast down,

the East will also weaken the West.

Its adversary after several battles

chased by sea will fail at time of need.

What do you think? Are these prophecies related to events that may occur in 2017? Is it even possible to predict the future?