Home
Astrology
Energy Forecast For October: Venus Retrograde Is Waking The Lion Within 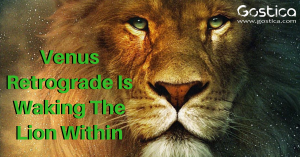 As Pluto turns direct while Venus begins her Retrograde Through Scorpio – secrets and power struggles from the past make themselves known.

Pluto just stationed to turn direct Sunday evening so themes of the unconscious, death/rebirth and secrets might be intensified right now… By the end of the first week in October, things should have smoothed out somewhat.

But in general, we have an intense period ahead – because this week Venus turns retrograde for the first time in 2 years.

You might remember Mars’ Retrograde period from this summer as pressured, frustrating and bringing strange confusion to your Twin Flame connection…

Even if you had felt complete clarity up until that point.

Well, this is a watershed year both for the Twin Flame collective and humanity – we have had an unusual 5 eclipses, plus both Mars and Venus retrograde in the same year.

So after Mars’ 2 months long retrograde this summer, representing purging and upgrading of the Masculine energy polarity templates…

The turn has come to Venus and the feminine energy polarity, and the templates of love.

For the next weeks, we’re set to be going over old ground, reevaluating and shifting our programming in terms of love and relationships – essentially how we bond with others.

With Uranus in Taurus currently opposition Venus, it’s set to bring major changes. Above all from within.

Uranus brings change, often in abrupt and uncomfortable ways. We’re being challenged to adjust how we approach love – including self love.

It’s about how our inner state and self-perception affects how we interact in relationships.

For Twin Flames, old fears of abandonment, childhood issues with feeling unloved, societal programming of feeling “not good enough” are likely to come up for resolution.

Although this time can be challenging, it’s the perfect time for inner work, clearing and uplifting your deeper system – as you’ll be working WITH the cosmic flow of energy instead of trying to “survive it”.

When we repress the negativity that’s being shown up to us, we don’t fully release it. It sinks back down and lodges into our system again.

Don’t just hope for gateways, or the universe to magically bring you and your Twin together in harmony – you must be open to reunion for it to happen. If your systems are full of negativity, love is “off channel”

Early this week, before Venus turns back in her tracks we are in the midst of a grand trine in water between Venus, Neptune Retrograde and the Moon.

This is a powerful and positive energy current which supports flow and harmony.

On October 5th, Venus begins her retrograde through Scorpio, then moving into and Libra in early November heavily deals with desire and passion.

Highlighted are themes around how many females are alienated from being fully free in their own womanhood– and the dysfunction and imbalance this brings to relationships.

This time can feel heavy and scary as it’s all about breaking through your own boundaries… Going into the depths to find your own connection with your own desires and OWNING your power!

If you want to do this alone and are not currently with your Twin, it might be simpler in some ways.

If others are involved right now, expect unconscious issues and shadows to rear their heads. We see the good girl turn lioness, suddenly reacting against boundaries placed on her in life.

As Scorpio is the sign of death/resurrection, the unconscious and power, there’s also a high indication that an ex will come into the picture again somehow.

Often, this is the universe’s way of helping you get closure and shift your perspective, to be ready for a new and happier chapter. Or to give you a chance to see why things went wrong, so you can make amends and reunite.

But be careful with your heart at this time. There’s the risk that you’ll have a change of heart once Venus turns direct.

Venus begins to shuffle backward for almost 2 months until she’s in her own sign of Libra after being in Scorpio since 9 September.

Venus isn’t happy in Scorpio at the best of times. It’s hard for her true nature to shine through and a simple attraction can all too easily take on the nature of an obsession.