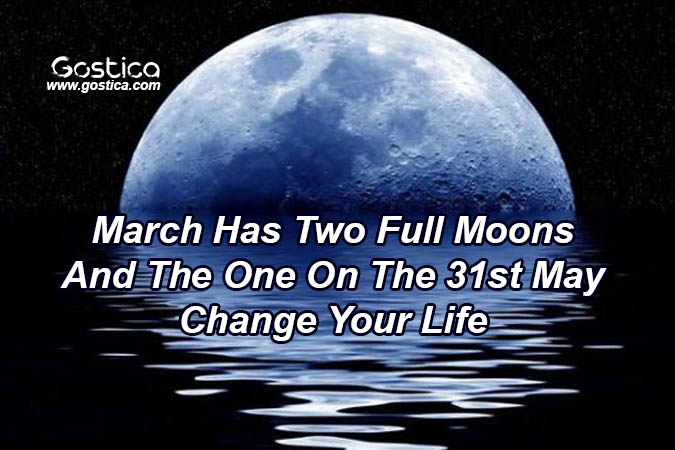 Mark your celestial calendar because March 31st is going to bring some major changes to your life.

The whole month of March is already unpredictable and full of energy and will play host to two full moons. The first full moon called Worm Moon appears between March 1-2 and the Blue Moon will appear the night of March 31st.

But what does this mean for you?

The moon that appeared March 1-2 has surrounded us with consciousness and direction, which has subconsciously caused you to look deeper into your soul and clear mistakes that you’ve made in the past year.

Have you felt a sudden urge to fix your relationship with the people you may have hurt in the past year and tie up any loose ends? This is due to the energy from the Worm Moon.

This month of reflection and meditation is preparing us for a shift in energy when the Sun transits to Aries.

There will be a rush of energy until the appearance of the Blue Moon, which may cause you to make rushed decisions and act spontaneously.

Don’t think illogically! You will be tempted, but think twice before deciding on something.

All of this energy seems like a positive change but it can be too overpowering for you. Aries is a determined sign that will cause you to become more resolute and determined to accomplish many things.

But remember to stay grounded! If not, the Blue Moon’s energy at the end of the month will cause bad vibrations and drain you instead of giving you the recharge you crave.

The Blue Moon’s energy on March 31st will have a definite impact on your life that will bring many unexpected changes.

You will find yourself in places you’ve never been before and experience a little magic you didn’t think possible. Don’t worry if you feel lost at first because that’s just part of the journey.

Have faith in the Universe! Its energy is here to help and guide you.

Let your friends know about the magical shift that will occur on March 31st by showing them this article. They’ll be glad you did