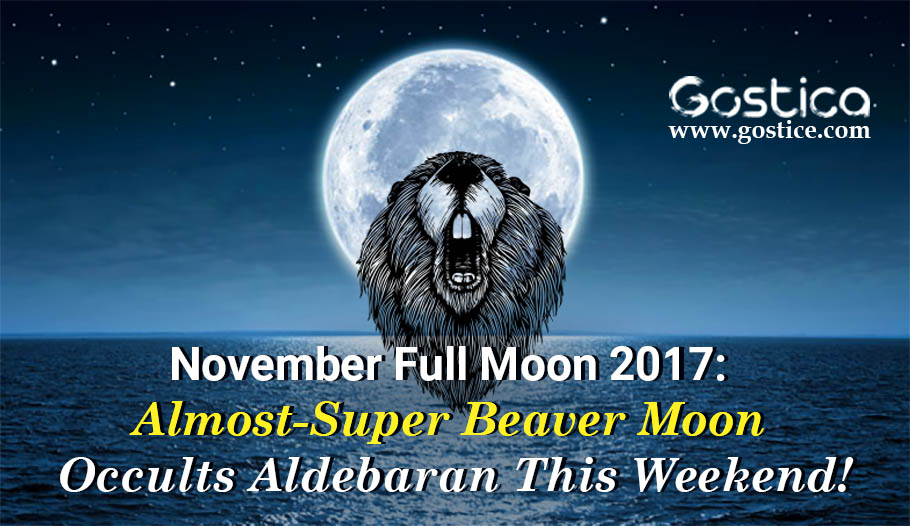 The full Beaver Moon will light up the night sky this weekend, and just miss being a “supermoon” as it passes into the constellation Cetus on its way between Pisces and Aries.

This full moon happens just before the moon reaches perigee, its closest distance to Earth.

A supermoon is defined as a full moon that occurs when the moon is at perigee. So, if the Beaver Moon were to come just one day later, it would be a “super” Beaver Moon.

Since the sun will rise at 7:30 a.m. on Nov. 4 in New York City, if you are near a flat horizon (or viewing from a rooftop or a tall building), the full moon and the sun will briefly share the sky.

A full Beaver Moon sets behind the Parliament buildings in Ottawa, Canada on Nov. 14, 2016

The full moon’s path through the sky won’t pass through any of the 12 constellations of the traditional zodiac.

This happens because of the ecliptic — the apparent path that the sun, moon, and planets take across the sky — passes just a quarter of a degree from the boundary of the non-zodiac constellation Cetus, the Sea Monster.

So, even when the moon is in the constellation Cetus, traditional astrology would place it in the sign of Taurus.

Because the moon’s orbit is inclined 5 degrees to the ecliptic, it’s not unusual that it would slip into that constellation; a similar phenomenon happens with some summertime full moons that pass into Ophiuchus, which isn’t a part of the zodiac either.

Supermoons can appear 30 percent brighter and up to 14 percent larger than typical full moons.

Besides passing into Cetus, the Moon will also pass in front of Aldebaran, the brightest star in Taurus, on the nights of Nov. 5 to 6, just after it becomes full.

When one celestial body blocks another, it is called an occultation.

This event will be visible from much of the eastern half of the United States, and observers as far south as Miami will be able to catch it.

People on the western edge of the zone, where the occultation is visible, will catch the latter half as it starts before moonrise.

In Europe, the southernmost areas where skywatchers will be able to see the occultation of Aldebaran will be in Paris and Munich.

Farther east, the moon will be set before it finishes passing in front of Aldebaran.

From New Orleans, viewers will only see the ends of the occultation at 7:38 p.m. local time, as Aldebaran, will already be behind the moon when it rises. In Miami, Aldebaran disappears at 7:50 p.m. local time and reappears at 8:27 p.m.

On the other side of the Atlantic, Londoners will see Aldebaran disappear behind the moon at 2:38 a.m. local time and reappear at 3:23 a.m.

Beavers (and bears) brace for winter

According to the Old Farmer’s Almanac, the name of the full moon in November is “Full Beaver Moon”; that is when beavers become active as they get ready for winter.

Many of our “traditional” full moon names were related to native peoples in northeastern North America. According to the Ontario Native Literacy Coalition, the Ojibwe called it Mnidoons Giizisoonhg, the Little Spirit Moon.

For the Ojibwe, it was the twelfth month, and it was a time for spiritual reflection ahead of the new year.

In the Pacific Northwest, the Tlingit called it Kukahaa Dís, the Scraping Moon, as it occurs when bears would begin to prepare their dens. A neighboring group, the Haida call it Cha’aaw Kungaay or “bears hibernate.”

In the southern hemisphere, November marks late spring. The Māori of New Zealand described the lunar months in October to November as Whiringa-ā-range, or “It has now become summer, and the sun has acquired strength,” according to the Encyclopedia of New Zealand.

In China, the traditional lunar calendar marks the November lunation as the ninth month.

(This was true in the west as well; the very name “November” means ninth month – starting the year in January was a post-medieval invention.) Called Júyuè, Chrysanthemum month, it’s named for the blooming of the eponymous flower.