Home
Astrology
This Is Your Most Secret Fear, According To Your Zodiac Sign 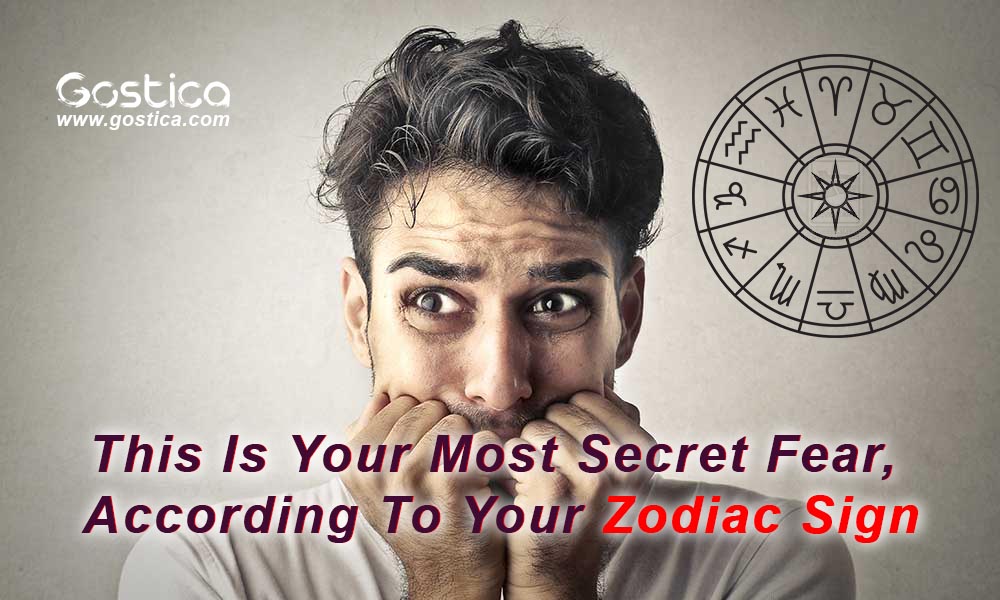 If you follow or study astrology, you’ve probably spent a good amount of time reading about the positive qualities of your sign.

Studying the dark side of every zodiac sign, like the fears we have, can make astrology a more useful tool for everyone.

The more we become aware of these fears and the negative beliefs that fuel them, the more we can move past them to become the celebrities/billionaires/prophets we were born to be.

The only thing scarier for an Aries than losing a fight is losing a friend in the process. Although they often won’t realize that until afterward, because they really hate losing a fight.

Aries are warriors. They throw themselves into combat not only because they want to win, but because it’s in their nature. They enjoy a good battle of wills, and if there’s no fight easily forthcoming, they’ll antagonize the ones they love, often without realizing it.

When an Aries’ actions backfire, the ones they love retaliate not by fighting back but by disappearing, and Aries will never forget his/her mistake. It puts Aries in a state of permanent “wrong-ness,” a feeling that absolutely makes their skin crawl.

Unfortunately, that restlessness spurs them to want to fight more, just to get the energy out. It’s a vicious cycle.

Taurus loves to be comfortable. They enjoy the simplest creature comforts: good food, good friends, a nice shag rug, a fireplace and anything that contributes to a warm atmosphere. It’s more than just a preference for comfort — for Taurus, there is a deep need to be surrounded by amenity.

Since the conveniences that they require have to be supported by financial stability, Taurus guards their money and fights off debt like the plague. If they see their account balance dwindling, the first thing they worry about is the changes they’ll have to make to their lifestyle.

They don’t earn money just to earn — they earn to spend. Nothing scares them more than instability, financial or otherwise.

Geminis change their decisions, opinions, choices and even their promises to themselves/others all the time. The reason? They don’t feel like sticking to them.

This quality is what often makes them such agile manipulators. They’ll change their stance so often you’ll forget what they originally told you.

But with every strength comes a shadow side, a weakness, and for Gemini that weakness is the fear of making decisions. Gemini is symbolized by the Twins, meaning there are two distinct sides to their personalities (more than two, when it comes to Gemini men) that are constantly in conflict with one another.

Recommended: Your Most Powerful Chakra based on your Zodiac Sign

The minute they settle on one choice, their “other half” begins to pipe up about what they could be choosing to do instead. The problem for Gemini is that they know both sides have great ideas.

Cancers are the ultimate agoraphobics. They like to stay in their safe zone, the place where no one can hurt them. The irony of agoraphobia, which is defined as “a fear of being trapped in places or situations where escape is difficult” is that it takes the people who suffer from it, prisoner.

Cancers might feel safer in a zone that they are used to, but the isolation that this creates isn’t good for them. They need to learn to branch out, to do the things that scare them, to go to places that are both physically and emotionally unfamiliar to them.

That way, they can learn that personal freedom has more to do with internal than external circumstances.

If there is one thing Leo won’t stand for, it’s walking into a room unnoticed. Lucky for them, they know how to work with that fear in a motivational way.

They make it almost impossible for people to ignore them, either through their wardrobes, their body language or the way they express themselves. Most of the time, they use all three to gain the attention of those around them.

Leos need to be witnessed. They need to be seen in order to validate their experiences. It is part of their mindset that if something isn’t seen by others, it doesn’t have the same impact, and that includes their own existence.

If you asked a Leo the old “if a tree falls in a forest” line, they’d answer confidently, “If no one’s around to hear it, then nobody cares! THE TREE WAS A FAILURE.” Good thing Leo does everything in their power to prevent themselves from meeting the same fate.