Home
Astrology
The Retrograde Effect May 2018: How All 3 Planets Are Affecting Your Life Right Now 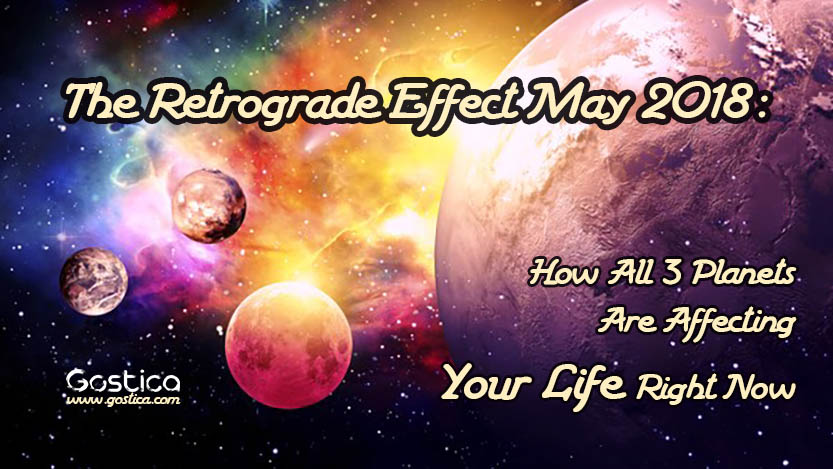 Every so often we have a line up of planets that enter into a retrograde mode at the same time.

When a planet is in retrograde, it begins operating with more of a “feminine” energy rather than a “masculine” energy. In many ways, it is like the planet is charged up using Lunar energies rather than Solar energy.

Our subconscious mind is much more powerful than our conscious mind and drives and directs more of our behavior, personality, and dreams than we realize.

When a planet goes retrograde, it travels within and starts exuding its effects on a subconscious level. It is almost like a retrograding planet has the ability to bring the subconscious into the conscious.

When a planet is retrograde, usually we feel out of sorts and all over the place, which is why people generally associate retrogrades as being negative.

Retrogrades are not negative, they simply shift us around so we can get back into alignment.

Retrograde energy is also highly feminine and in these patriarchal times, on a subconscious level, many of us struggle to accept and integrate feminine energy into our everyday lives.

Retrogrades are powerful and magical times, which is why when many planets shift into retrograde at the same time, it can have a profound effect on us.

In May 2018, a total of 3 planets will be retrograde including- Saturn, Jupiter, and Pluto.

These planets each have their own retrograde cycle, however, the combination of their energy in May, in particular, is likely to be significant.

In a nutshell, when so many planets go retrograde it typically represents a time to slow down and to go with the flow, rather than trying to take action.

It is a time to tune into and work with your feminine energy, rather than your masculine energy.

Masculine energy also rules over data, facts, figures, the ego mind and all of the other things we need to navigate through this physical world.

We, of course, need masculine energy as it helps us survive, thrive and get things done, but we also need feminine energy.

Feminine energy also rules over emotions, feelings, intuition and our connection with others, nature and the planet.

We cannot operate in this world with only one of these energies. We need both, just like we need both sides of the brain, as together they create the harmony and balance that will support us through life.

As a society, however, masculine and feminine energies are very much out of balance, and so when the planets start operating in a retrograde motion, we really feel the effects.

The selection of planets moving retrograde in 2018 all carry a similar theme. Even though we are being asked to slow down and go with the flow, we are also being asked to question where we operate our lives from.

The theme of this retrograde effect is really due to Venus, who retrogrades the most infrequently of any other planet. This makes her retrograde cycle one of the most potent.

Here is a summary of the planets retrograde and their effects-

Jupiter retrograde is a time to find success by doing things differently and following your intuition. Jupiter is retrograde until July 10, 2018.

Saturn: Saturn retrograde will be guiding us to step up and take responsibility for the choices we have made. Saturn will be asking us to claim back our power and will help us to uncover subconscious blocks or patterns that are holding us back. Saturn will go directly on September 05, 2018.

Pluto: Pluto retrograde will be guiding us to really uncover the skeletons hidden in our closet. Pluto will also be guiding us to make changes and to transform our lives to a new level of power.

Pluto works on such a deep, subconscious level that we are likely to not even understand or comprehend the influence of Pluto. Pluto moves direct on September 30, 2018.

As a general rule of thumb, when planets furthest from the Sun-like, Jupiter, Saturn and Pluto go retrograde we are likely not to feel it as much. This is because these planets are already operating on a subconscious level most of the time. However, with the latest full moon transition, we are feeling everything 100x more intensely than we normally would.

When any planet goes retrograde, it is generally a time of self-reflection and to explore the deeper and more profound thoughts of the subconscious mind.

Activities like journaling, spending time in nature and creative projects are great ways to make use of this retrograde time.

Also, try your best to go with the flow rather than creating expectations for yourself and others.

The more you can go with the flow and allow the energies to guide you, the more you trust in whatever the Universe brings for you, the easier your life will be.