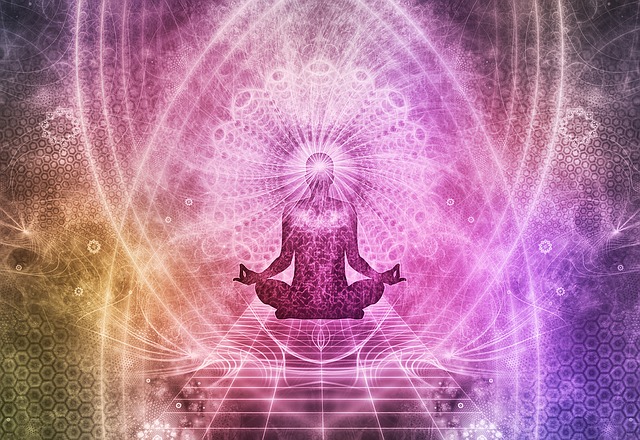 “IN EVERY CULTURE AND IN EVERY MEDICAL TRADITION BEFORE OURS, HEALING WAS ACCOMPLISHED BY MOVING ENERGY.” – ALBERT SZENT-GYORGYI, BIOCHEMIST AND NOBEL PRIZE WINNER.

For centuries the ancient wisdom keepers and healers in several traditions had a keen understanding of the energetic body. The healing traditions from China, India, Japan and Tibet, as well as other countries all spoke of energy channels, meridians or nadis along which the vital energy flowed.

Life was considered to be a bio-electrical and vibrational energy phenomenon and so health revolved around balancing energy through various means. Life existed because of life force and energy running through and animating the body, ensuring we can move, breathe, digest food, think and even feel. 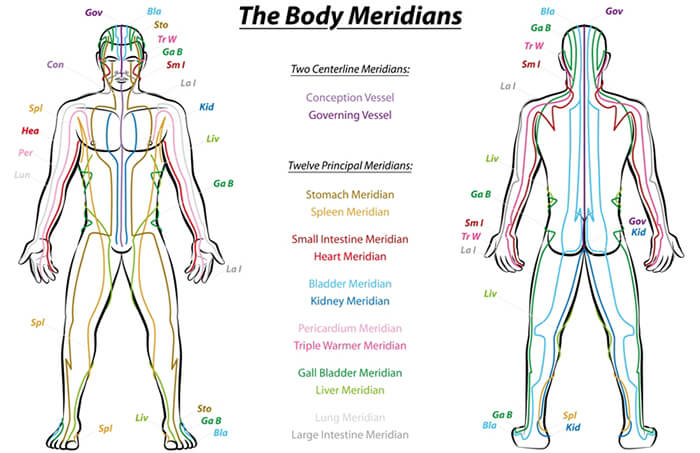 This vital life force or chi, is composed of two kinds of forces, yin and yang, and flows along a sophisticated network of energy pathways, or highways, circuiting the body. Over 2000 years ago ancient cultures knew of the existence of these energy channels.

They were called ‘sen’ in Thailand, ‘nadis’ in India, ‘meridians’, ‘channels’ or ‘vessels’ in China and Japan, and ‘channels’ in Tibet. In India, where many eastern healing arts developed, there were said to be 72 000 nadis or energy pathways. Disease is believed to be a blockage in the energy flow of these channels. A range of healing traditions, including acupuncture, acupressure, massage and yoga, are founded on the principle of the existence of energy channels or pathways, known as meridians, or nadis, running around the body in an expansive network.

While it may seem a little airy fairy to some to consider the energy body while we have flesh and bone, at source we are an energy field, embedded into another energy field. Our bodies are electromagnetic in nature and science has measured these frequencies with advanced machines, like EKG’s and MRI scanning, for many years.

Recommended: This Amazing Study Shows How Humans Can Sense A Force Field Around Their Body

Numerous studies demonstrate these energy pathways and points conduct electricity even when needles aren’t used. And the massage technique of Shiatsu have been found to stimulate the same energetic effects. Similarly, Qigong,Tai Chi and the postures of yoga, have been found to increase electrical conductance at acupoints, yet science never believed in the existence of meridians until now. 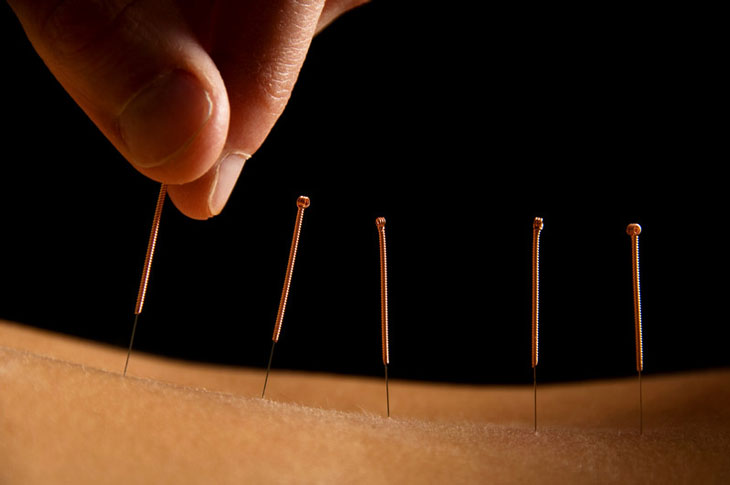 Recently scientists at Seoul National University confirmed the existence of meridians, which they refer to as the “primo-vascular system.” They say that this system is a crucial part of the cardiovascular system.

Previously, North Korean scientist Kim Bong-Han proposed that he had found meridians in the early 1960’s.  Dr Kim Bong-Han showed over 50 years ago that new tubular structures exist inside and outside of blood vessels and lymphatic vessels, as well as on the surface of internal organs and under the dermis. He believed they were the traditional meridian lines. The meridians were called Bonghan ducts or channels, after his research, but now the existence of this system in various organs has been corroborated by further research.

The current Korean researchers now believe the primo-vascular system is in fact the physical component of the Acupuncture Meridian System. And it has also been suggested that this system is involved in channelling the flow of energy and information relayed by biophotons (electromagnetic waves of light) and DNA. 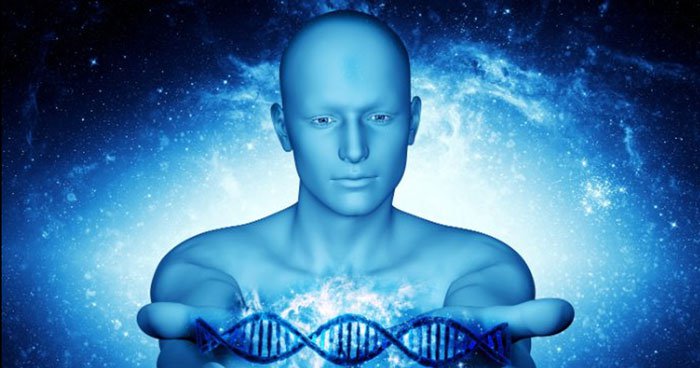 There may be a link between the meridians and energy and information relayed by DNA.

The Korean scientists studying oriental medicine with biophysical methods injected a special staining dye which coloured the meridians. By injecting the dye onto acupuncture points, they were able to see thin lines. These did not show up at non-acupuncture point sites where there are no meridians. The researchers discovered that the meridian lines are not confined to the skin, but are in fact a concrete duct system through which liquid flows, and that this liquid aggregates to form stem cells.

Recommended: Which Chakra is Blocking You From Living the Life You Desire? Take the Test NOW!

The nature of meridians, in their elemental structure, and as vessels for the life force, show the intricacy and profound connection of our body at a cellular level, to the universe. We are intimately connected by the elements, energetic structure and flow of energy, to all life, at a cellular, physical level. Our earth is also said to have energetic pathways or ley lines, akin to meridians. 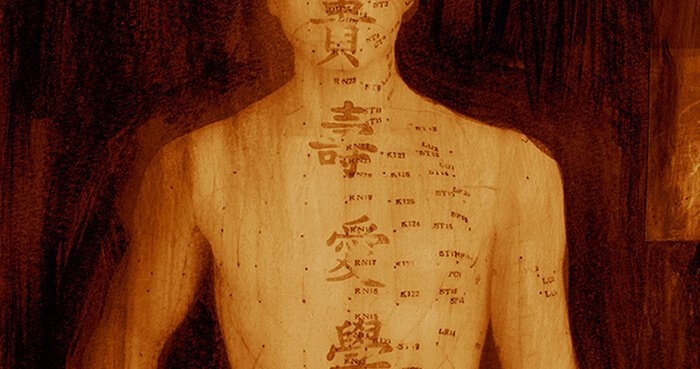 How are meridians related to health?

Our bodies need balance. A balanced flow or energy, not too much or too little, is conducive to good health. This is the same in the way we live our lives. Balance is paramount. Just enough food, water and a healthy balanced lifestyle. As the Buddha said: “middle way” or moderation in all things.

We can see this harmony and balance in life, as the balance between the energies of yin and yang – or more simplistically, masculine and feminine – the two opposing and catalyzing energies of the universe.

In our bodies we need balance, not too much or too little.

Our health is vibrant if there is harmony and balance between these two forces in the body. If the balance is disturbed, and the flow of one of these forces becomes greater than the other then illness arises. These forces or energies flow through very definite channels in the body, or meridians, and these are the body’s healing energy pathways.

Recommended: How To Balance Your 7 Chakras System – Chakra Empowering

Nadis can also be found in the subtle body where they carry thoughts, feelings, and nerve impulses. When these nadis are blocked, we lose our ability to feel, and connect deeply with others, the environment and ourselves. In the same way that veins and arteries are important for the body to function, nadis weave through our physical nerves and the matrix of consciousness that circuits the mind and self, supporting our physical expression from the otherworldly dimensions of existence. 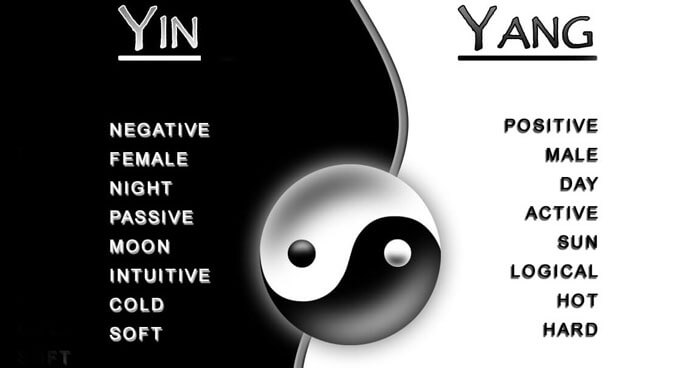 Chi is made up of two kinds of forces, yin and yang.

When the flow of energy is blocked, it causes low energy and illness. Practices like yoga and meditation work on these subtle energy channels, supporting the flow of energy through the body. According to some ancient indian texts there are 350 000 nadis or energy pathways in the body. In traditional Indian medicine and spiritual science, the energies of the physical body, the subtle body and the causal body are said to flow through the nadis. Within this framework, the nadis are said to connect at special points of intensity called nadichakras.

The three most important nadis are those running along the spine: ida, pingala and sushumna. The Sushumna is the central channel of energy in the human body and it runs from the base of the spine to the crown of the head and carries kundalini energy, which is the primal evolutionary force.

Kundalini is awakened through yoga and meditation and is said to lie dormant at the base of the spine. Activation of the kundalini leads to higher consciousness states. The aim of yoga is to broaden the sushumna and to unite the pathways. Purifying all three nadis leads to overall health, and wellness of body and mind, as well as spiritual growth. Various Pranayama techniques aid in helping to keep these nadi channels open. 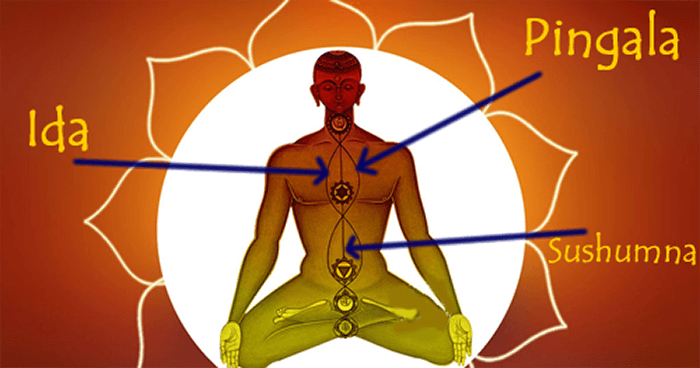 The three most important nadis are those running along the spine: ida, pingala and sushunma.

If you are sensitive to energy and have had energy treatments, such as acupuncture, you may have felt streams of energy or a flow of cold or heat, for example, up the legs or arms. This is a freeing up of energy in the meridians and the flow of energy that is released when a blockage is removed.

There are many wonderful healing modalities based on the meridian system that support radiant health. By enhancing the flow of energy through the body, balance and health is achieved and we come in touch with our true selves. Acupuncture is a therapeutic modality used in China as early as the late stone age. It was used to treat all ailments affecting people. Acupuncture did not enter modern Western consciousness until the 1970’s when China ended a period of isolation and resumed foreign political and cultural contacts.

The range of applications for acupuncture has grown slowly in the West, possibly because of the belief that it has no scientific basis.  Perhaps now with the scientific proof of meridians, acupuncture will become more widespread for all ailments, along with other great healing modalities based on the energetics of the body, supporting more people to have vibrant health and wellbeing.