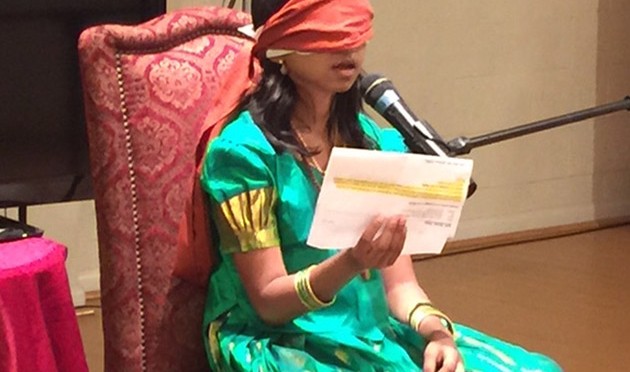 Nine year old Yogamaatha, from India, astonished onlookers in the United States recently, as she applied three blindfolds over her eyes and proceeded to read sentences from the piece of paper in front of her.

How did she do this?

Yogamaatha claims that she attended a course at Gurukul, in India, where she was initiated by a Guru and now possesses the unique ability to see with her third-eye. She states that this mystical power is a “learned ability”, opposing those who believe that gifts like these, are only for the chosen few.

Not only can she read blindfolded, this nine-year old states that she can also ride a bicycle through traffic and dodge cars.

In this short video, Yogamaatha’s curious abilities bring her all of the way to Capital Hill, where her eyes are covered and she is tested.

She then makes her way to a Vedic Temple in Southern California and the results were astonishing, proving to onlookers that not only that she could read entire sentences, she also was able to play games, and even beat another child without blindfolds, at tic-tac-toe!

Yogamaatha, is not the only child who has facilitating the teachings of the Guru’s in India. 12-year-old Ma Nithya Maheshwarananda from Dallas, USA says she opened her third eye just over a year ago while attending a three-week program.

In this program the Master, by use of initiation and meditation, cultivates the inner dimension of yourself, by activating the pineal gland and nourishing the extrasensory abilities.