Home
INTERESTING
We Are Living In A Hologram Designed By Aliens, Says NASA Scientist 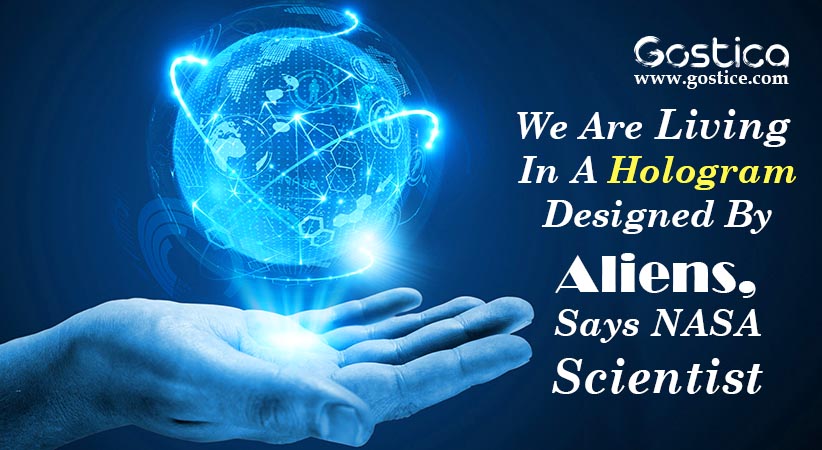 Who says there are no open-minded scientists at NASA?

A NASA scientist suggests you are living inside a hologram created by advanced alien species.

What if everything you have ever done or will do is simply the product of a highly-advanced computer code? Every relationship, every sentiment, every memory could have been generated by banks of supercomputers.

This was the intriguing theory first proposed by Nick Bostrom, Professor in the Faculty of Philosophy at Oxford University and founding Director of the Future of Humanity Institute and of the Programme on the Impacts of Future Technology within the Oxford Martin School, there are several scientists who subscribe to this theory.

MessageToEaglehas previously reported on how Rich Terrile, director of the Centre for Evolutionary Computation and Automated Design at NASA’s Jet Propulsion Laboratory suggested our creator is a cosmic computer programmer.

This would imply that we are living in a holographic world and everything around us, including ourselves, is not “real”.

Rich Terrile, still stands by his opinion. “Right now the fastest NASA supercomputers are cranking away at about double the speed of the human brain,” the NASA scientist told Vice.

“If you make a simple calculation using Moore’s Law [which roughly claims computers double in power every two years], you’ll find that these supercomputers, inside of a decade, will have the ability to compute an entire human lifetime of 80 years – including every thought ever conceived during that lifetime – in the span of a month.

“In quantum mechanics, particles do not have a definite state unless they’re being observed.

“Many theorists have spent a lot of time trying to figure out how you explain this.

“What I find inspiring is that even if we are in a simulation or many orders of magnitude down in levels of simulation, somewhere along the line something escaped the primordial ooze to become us and to result in simulations that made us – and that’s cool.”

The idea that our Universe is a fiction generated by computer code solves a number of inconsistencies and mysteries about the cosmos, like for example our quest for extraterrestrial life and the mystery of dark matter.

However, there also those who think the Matrix theory is flawed. “The theory seems to be based on the assumption that ‘superminds’ would do things in much the same way as we would do them,” Professor Peter Millican, who teaches philosophy and computer science at Oxford University say.

“If they think this world is a simulation, then why do they think the superminds – who are outside the simulation – would be constrained by the same sorts of thoughts and methods that we are?

Is it possible to escape the matrix? Image from movie The Thirteenth Floor

“They assume that the ultimate structure of a real world can’t be grid-like, and also that the superminds would have to implement a virtual world using grids.

However, Professor Millican does believe there is worth in investigating the idea.

“It is an interesting idea, and it’s healthy to have some crazy ideas,” he told The Telegraph.

“You don’t want to censor ideas according to whether they seem sensible or not because sometimes important new advances will seem crazy to start with.

“You never know when good ideas may come from thinking outside the box.

“This Matrix thought-experiment is actually a bit like some ideas of Descartes and Berkeley, hundreds of years ago.

“Even if there turns out to be nothing in it, the fact that you have got into the habit of thinking crazy things could mean that at some point you are going to think of something that initially may seem rather way out, but turns out not to be crazy at all.”