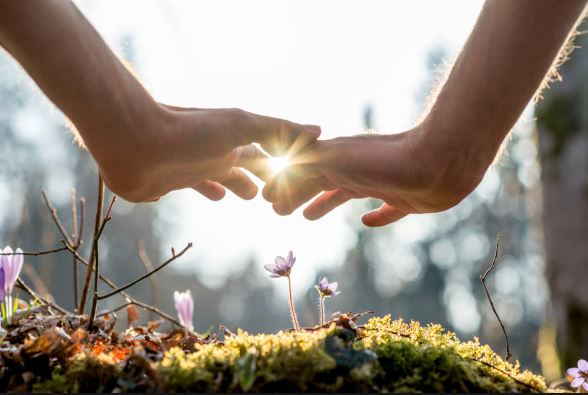 Having said that, if you have this gift and have recently only found out that you have it, or you knew you had it but didn’t know what it was, it is vital that you don’t eat up the negative energy from the people and the world around you. This is easy to do if you don’t really know how to handle your emotions.

So I wanted to write a follow up and advise you how to protect yourself from the negative energies, whilst soaking up the positive energies of others around you, and tapping into the deeper, pure energies, of the collective consciousness.

5 Steps to Protect Yourself as an Empath:

1. Recognise that you are indeed an empath

May seem rather obvious that one, but a lot of people get confused. Being an empath and feeling what others around are feeling is all about you being a part of a larger consciousness.

As an empath you have managed to tap into this ‘collective consciousness’, which is why you are able to feel what other’s around you are feeling.

It’s not a bad thing, as you are able to feel the negative emotions as well as the positive emotions.

When you recognise that the feelings that you are experiencing may be coming from outside you, it’s important to remember they are still a part of you. You make up a tiny fraction of the collective unconsciousness in the world, therefore the feelings you may feel from others are really feelings that are coming from you as well.

2. Turning negative feelings into positive ones

If you have ever been to a job interview you’ll know that one of the main things that the interviewer might ask you is ‘What is your biggest weakness?’

The correct response to this is telling them a perceived weakness, like being too much of a perfectionist, and you go on to explain that you know this, but the interviewer actually sees it as a positive thing. it’s rather like that.

When you feel the negative emotions of others around you, take that feeling for what it is, and turn it into a positive and send that energy back out into the collective consciousness and direct it toward the people around you.

There are people in this world who feel the need to drop the energy level of others around them in order to gain the sympathy, and love, of those around them.

Whilst these people are able to change, they first have to recognise that they are energy vampires. If they don’t they will never change so it is best to steer well clear of these people and send them positive energy from a distance.

You can also protect yourself from the energy sucking by imagining yourself in a huge clear bubble, and from it you can send positive energy, but repel negative energy.

We are all at different stages in our consciousness growth, but we can learn to tap into the collective consciousness in order to help ourselves and help those around us.

A great way to do this is to simply meditate for 15 minutes, twice per day. you don’t need to go in for anything fancy and find a guru and lick their feet whilst they heap lots of wisdom on you.

Recommended: This Is Why Empaths Freeze Around Fake People

You simply just sit down, relax and try and mentally let go of everything. Think of it as a shower for the mind, and you’re clearing your energy in order to tap into the pure energy of the collective consciousness.

When we are being dishonest with ourselves, and with other people, we create incongruence in our minds.

We go over and over a situation and tell ourselves ‘I should have said that…….I should have done this………I shouldn’t have accepted that from them……’ And when that happens we create a shift in our energy that can last a long time.

Now I am not talking about being cruel and telling everyone ‘Yes, your arse does look big in that’ or ‘yes you are a bit of a dick, but I still like you’ that is called being cruel. When someone asks for your honest opinion about something, ask them if they want the truth or for you to tell them what they want to hear.

Pretty soon the only people who will ask for your opinion are the people who REALLY do want the truth.

Now I know all this talk of collective consciousness and pure energy may sound a little out there, but you may have a different word for them, and whatever terminology you use the same steps will still apply.