Parapsychologists have been studying Near-Death-Experiences (NDEs) for many years, however, most of us aren’t familiar with what they’ve been finding.

We are familiar with the idea that many see a tunnel or a light in the distance, see or meet passed on loved ones, and then return with perhaps a new outlook on life, but what else do you know?

Here are some of the more interesting phenomena scientists have reported:

1.) People can have NDEs when they are brain dead.

A famous case occurred during an operation referred to as a “standstill,” where one’s body temperature is reduced to 60 degrees (F), the heartbeat and breathing stop, and blood drains from the brain – in other words, a person is put to death to perform surgery.

In Pam Reynold’s case, she left her body, observed the operation and also entered the tunnel and met with deceased loved ones, before returning to her body.

In the book “Mindsight,” researchers documented 31 cases of the blind experiencing normal vision during NDEs and reporting identical experiences to those who experienced NDEs with normal vision.

3.) Scientific discoveries have been brought back by people having NDEs. 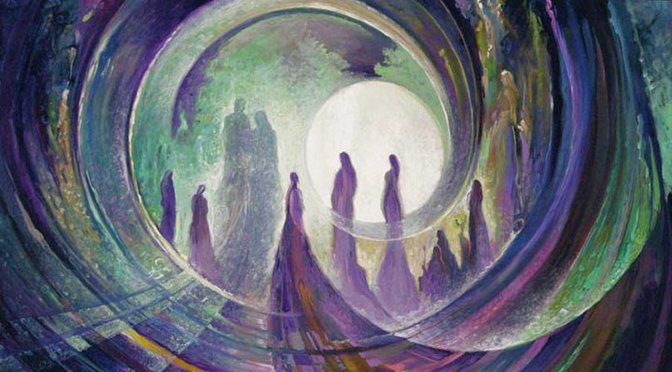 One instance happened when Lynneclaire Dennis returned from an NDE describing a three-dimensional geometric structure of light she called “The Pattern” and explained was “the essence of all being.”

Recommended: The 5 Ghosts You’re Most Likely to See

The “Mereon Matrix”, as it is called, has been studied by world-renowned mathematician Dr. Louis H. Kauffman, who concluded that a Ms. Dennis, non-scientist, had described in detail a complex geometric structure that coincided with knot theory in physics and did so without any prior knowledge of geometry, knot theory, or science.

4.) NDEs can be shared by groups of dying people.

A fascinating example is that of a crew of wildland firefighters that took place in Colorado in 1989. Trapped by a change in conditions, firefighters had to take refuge in individual foil shelters while the fire burned around and over them.

It was during this time in the shelters (known as “turkey cookers” in this field), that one firefighter found himself above this scene looking down.

As he looked around, he saw his fellow firefighters gathered near him, doing the same. He went on to witness the bright light and meet his deceased loved ones, but upon returning, discovered that several other firefighters had the same experience – they had experienced a group NDE!

5.) Some have had visions of the future during NDEs that later came true.

In 1975, Dannion Brinkley was struck by lightning while talking on the phone during a thunderstorm. During his NDE, he was shown 12 future events, presented to him almost as if he were watching the news on T.V.

One event Brinkley had predicted was the nuclear meltdown and explosion that occurred at Chernobyl in 1986.

6.) Children have similar NDEs to adults.

Children also describe encountering “light beings” and deceased loved ones but most also encounter parental figures – some of which are more critical than loving, giving the child stern advice or pointing out previous bad behavior.

Recommended: 7 Things Our Deceased Loved Ones Want us to Know

Interestingly enough, some children reported having to go to animal heaven before they were allowed to visit “people heaven.” Overall, though, the experiences between child and adult NDEs were very similar.

7.) Not all NDEs are pleasant.

Despite what is seen in the movies and on T.V., NDEs can be difficult or distressing and, in a few cases, horrifying experiences. Known as LTPs (for Less Than Positives), up to 18 percent of all NDEs fall into this category. It is believed that LTPs may happen when someone is fearful or agitated just prior to the NDE or when someone is in need of a readjustment in the trajectory of their lives.

Those that return from LTPs typically gain a new perspective on life and choose to live it differently (and more positively) after the experience. Anyone can have an LTP – it is more about needing a “course correction” than about being a specific type of person – even good people can have them. What is true is that all that experience LTPs learn from them!

NDEs often have commonalities, but in this article, we’ve seen that there are exceptions – that they are individual experiences in some ways and common in others. Had you heard about some of these different types of NDEs? Share your thoughts in the comments area below!

Atwater, P.M.H. (1999). Children of the New Millenium: Children’s Near Death Experiences and the Evolution of Humankind.

Rommer, B. (2000). Blessing in Disguise: Another Side of the Near Death Experience.

Author: Dr. Carol Pollio is the Director of Intuitive Investigations®, a paranormal investigation and earthbound spirit rescue organization. After a successful career as a Chief Scientist in a federal land management agency and having honorably served 31 years in the military, Dr. Pollio is now focusing on the field of parapsychology, blending her knowledge of scientific principles with her intuitive abilities and psychic mediumship skills.

She is also a certified Parapsychological Field Investigator with the Office of Paranormal Investigations and an Elemental Space Clearing® Practitioner.