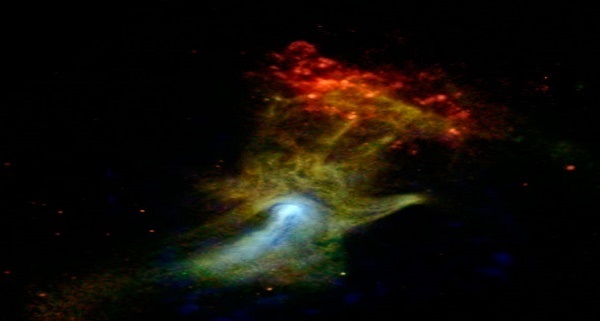 A TERRIFYING image captured by specialist NASA telescopes aimed at a galaxy 17,000 light years away has sparked online speculation the Creator of Universe has been caught on film.

The space agency’s Nuclear Spectroscopic Telescope Array – or NuSTAR – was aimed at a pulsar (or neutron star) called PSR B1509-58 a staggering distance from earth.

What they were sent back was a spectral vision of an outstretched hand – which has become known as the Hand of God.

The ‘hand’ is believed to be the remnants of the star which went supernova and ejected an enormous cloud of material – leaving pulsar PSR B1509-58 in its wake.

The remnant cloud, when viewed via high-energy X-rays, shows up as a green, red and blue hand, a staggering 175 light years across.

NuSTAR telescope principal investigator Fiona Harrison, of the California Institute of Technology in Pasadena, said: “NuSTAR’s unique viewpoint, in seeing the highest-energy X-rays, is showing us well-studied objects and regions in a whole new light.

“The new image depicts a pulsar wind nebula, produced by the dense remnant of a star that exploded in a supernova.

“What’s left behind is a pulsar, called PSR B1509-58 (B1509 for short), which spins around 7 times per second blowing a wind of particles into material ejected during the star’s death throes.

“As these particles interact with nearby magnetic fields, they produce an X-ray glow in the shape of a hand.”he pulsar is located near the bright white spot in the image but cannot be seen itself, NASA officials said.

Scientists aren’t sure whether the ejected material actually assumes the shape of a hand, or whether its interaction with the pulsar’s particles is just making it appear that way.

Hongjun An, of McGill University in Montreal, said: “We don’t know if the hand shape is an optical illusion.

“With NuSTAR, the hand looks more like a fist, which is giving us some clues.”

The red cloud appearing at the fingertips is a separate structure called RCW 89.

Some believers on religious websites are not so scientifically prosaic in their view.

A self-proclaimed pastor called Smote73 blogged: “This image shows God is everywhere in the universe. Perhaps showing his hand many light years away is to remind us he’s always there.”