Many scientists argue about whether people have more than 2 or even 3 strands of DNA. Some even believe we have 12 or more threads of DNA. The name is an acronym DNA coming from the name of deoxyribonucleic acid. DNA contains the codes that give instructions to the cells and tell them how to behave. Most DNA is located in the cell nucleus, while a much smaller portion is located in the mitochondria.
In the traditional model of DNA it is intended to carry an information code, made up of four chemical bases. In a standard DNA has about 3 billion base chemical, and 99% of the DNA is the same for all people. We all know DNA model with two threads, which is formed when the nucleotides are arranged in the two long fibers, forming a double helix. The structure of the double helix looks a bit like a ladder. How it is structured DNA allows to store up to 700 terabytes of information in only one gram. It sounds amazing, right 🙂

Scientific evidence for three or four strands of DNA 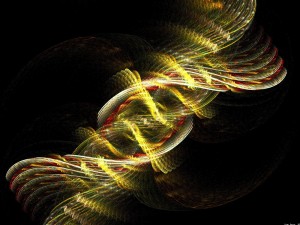 The Human Race with three strands of DNA?

A few years ago it was officially recognized as the first case of a child with three strands of DNA. Unfortunately the child is born blind and with severe disabilities. Recently, a study conducted in Cambridge examined the assumption that there may be and 4 strands of DNA (quadruple helix). Some scientists even believe that the human body has the potential to develop up to 12 strands of DNA.
There is a large group of geneticists who believe that people experience large evolutionary progress since our DNA is changing faster than normal. They are sure about the development, but do not know what will develop. About 97% of our “junk DNA” has also become more active, which could be one reason to become more intuitive and intelligent. The mutation of DNA double to quadruple spiralase expected to have a huge impact on human life. It will add more perception and awareness will increase our awareness and can give us answer some key questions, such as how it is created and where life originated.

Is DNA the key to spiritual enlightenment?

Many spiritual teachers believe that the activation of our higher strands of DNA will allow the body to process more data and expand our consciousness. The human brain is a marvelous organ, which still holds many secrets. Did you know for example that a healthy human brain can process more than 400 billion bits of information per second? And know that we consciously process only 2000 of these 400 billion information at a certain point. In other words, our conscious mind allows us to be aware of about 1% of reality. This means that the rest of reality information is processed by our subconscious. Some geneticists suggest that DNA is more than just a way to store genetic information. They believe that the activation of more strands of DNA will help us to set our body on the higher frequencies. This in turn can give us healing abilities and the opportunity to change our bodies. As a result, life may increase and activate abilities, such as clairvoyance and therapy.
Nobody can say for sure what changes will result in mutations in our DNA, but most scientists recognize these changes and are aware that lead to the evolution of our species. If geneticists and spiritual leaders are right, we probably evolve to three DNA strands, which may be the key to enlightenment.