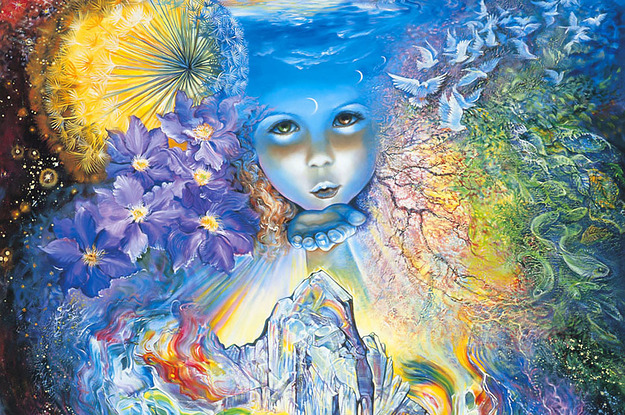 Reports of the unique generation known as the Indigo Children have permeated our collective consciousness since the 1980s. But as these “children” have grown into adulthood, we are blessed with an entirely new wave of beings known as the Crystals.

Beginning to arrive en masse in the 1990’s, a few scouts made their way through to test the waters as early as the 1980’s. Their temperament is entirely fresh in comparison to their elder spiritual counterparts yet their unique life path and imprint on our world is just as profound. While the Indigos forged their way by challenging the establishment, the zen and blissful nature of the Crystal Children came here in sublime harmony to champion a loving partnership with the Gaia.

It is the Crystal Children who will herald in the next phase of humanity honoring the ways of the natural world, protective of the Earth and in gentler ways illuminating ways to shift the trajectory of humanity.

As we are witnessing the millennials (many of whom are early Crystals) re-shape corporate America, question established moral structures and step away completely from the materially driven ideal of success, we can see early inklings of just what their impact will be.

The Crystal Children follow their heart in all matters, championing an idealism not as a lofty notion but actually put into practice. They are not contented to suck up and work hard in order to attain vernacular success but rather are driven in heart and soul by making the world better in every facet.

Because of their closeness to the spiritual realms, the Crystal Children often had delayed speech waiting until 3 or 4 years of age to begin connecting with the outside world. While this freaked out some parents, it is a sign of their divine intimacy with the other realms.

Rather than panicking, many parents instead chose to nurture their telepathy and creativity offering more expanded forms of connection. Songs and physical language became the norm as they offered instead more meaningful ways of communication. Singing, rocking, touch and telepathy became their chosen mediums and ignited the psychic gifts of kids and parents alike.

Their delays and unusual ways created a wave of labels – autism and Asperger’s spectrum were born of this generation. Beyond a limitation, this difference is striking and instructs their enlightened genetic blueprint.

Parents should not be discouraged by these diagnoses nor should they seek to fix it! As literal angels that enter our world and gene pool, the Crystal Children are here to illuminate the inherent spirit of mankind.

True autism means literally that they are unable to connect with others. Any encounter with this heightened being however shows us clearly this is not the case. They are re-connecting on higher dimensions than that of previous generations.

Recommended: Are You A Blue Ray? You’ve heard of Indigo and Crystal Children, but what about the ones who came before them?

Far from cut off from others, they are here to bring these celestial frequencies into human form. Kindness, compassion and a deep love of the Earth and all her inhabitants are the norm.

I’ve done readings for years for kids with autism and can tell you that their telepathy is strongly in tact. It is the non-verbals who have the most to say and are grateful for an opportunity to be heard. They are avid walkers between worlds here to convey great knowledge and wisdom that will alter forever our understanding of the universe we inhabit.

Sensitivities of all manner –food allergies, intolerance of outside stimulus, and reactions to the prescribed medical model– are but a few of the ways these beings are highlighting the ills of the modern world. Because of their response, GMOs are being removed from mainstream foods, we are becoming more aware of the pollutants in our air and water. Their reaction to our world is enabling us to change to more natural ways of living on the planet free of harmful toxins and its effects.

NOT FROM THIS REALM

The most notable physical feature of the Crystals is their eyes– deep, wide and penetrating– these beings ooze “old soul.” It is their wisdom which is most startling, for it feels as if they can at times see right through you beaming back loving compassion and understanding.

From their eyes exude waves of divine light. Sometimes intense, not everyone can rest easy in their gaze, for their power is commanding. To be sure, being in their presence can be unnerving to those who walk out of sincerity.

Not surprising as the daughter of a shaman, I was more impressed that the school recognized and honored her uniqueness. No condemnation, no being told what to draw instead, she was seen and encouraged in drawing the places that felt like home to her.

PATH OF THE CRYSTAL CHILDREN

Thanks in part to the aggressive trail blazing ways of the Indigos, the Crystal Children appeared in a unsteady society emboldened to walk in peaceful harmony and gently offer new ways of being. In their heart centered ways, they are more easily received than the Indigo generation and will help create a safer, more beautiful and inclusive world for us all.

They move not from force but from clear purpose as beacons of possibility and peace. It was this generation that created school recycling programs, collected clothing and food for the less fortunate and spoke in public forums on what they saw as the demise of our civilization. Immensely connected to nature, they are creating a resurgence in living off the grid, working with crystals as tools for well being and seek healing outside of the medical paradigm.

The Crystals emanate a pure vibration of love. More than simply the next wave, they are here to elevate humanity and pave the way for new compassion, community and ways of being that will uplift us all. They are the future illuminating true unity consciousness free of greed and ego based drives.

Continues on the next page >>>