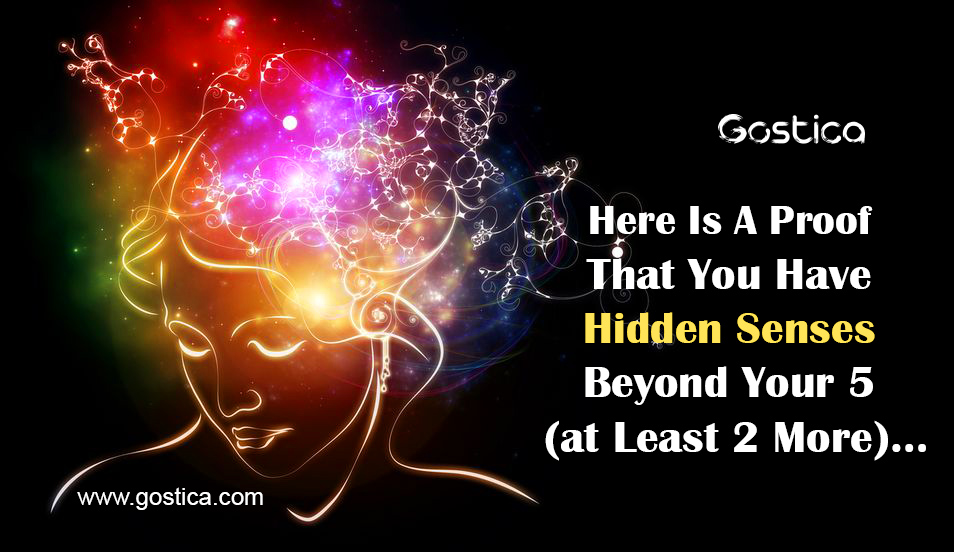 We gain information, perceive the world, and experience reality through our five senses: sight, hearing, smell, taste, and touch.

While we use these five senses to perceive everything around us, there are other aspects beyond these senses that are inherent in us.

Even though we don’t give them much attention, these latent senses play a significant part in our survival.

Examples of these hidden senses are:

Humans can sense balance and acceleration, temperature, and pain due to nerve damage.

We can sense hunger and thirst whenever we need to refill our bodies.

We can sense energy and emotion via our empathic abilities and our mirror neurons.

Our evolution gifted us with these senses and abilities because they helped us survive, evolve and thrive as species.

Other animals have some really interesting abilities. For example:

Birds and bacteria are aware of directions based on Earth’s magnetic fields.

Some species of fishes and dolphins detect electric fields. Many types of fishes detect water pressure to maintain buoyancy.

There are senses that go beyond our idea of reality!

All of the above senses are based on each one’s physiological receptors. However, there is more that goes beyond our understanding of physiological-based senses. And it

may be divided into a philosophical and a metaphysical aspect.

Recommended: This Amazing Study Shows How Humans Can Sense A Force Field Around Their Body

As we said before, our senses were developed through our evolution to help us perceive parts of reality that were crucial for our survival.

But, since we know that some animals perceive parts of reality we are completely blind to, who are we to tell that what we can perceive through our senses is the complete picture of reality?

Who knows how many details of reality fly past us every moment and we don’t have the sense to perceive them just because they are not necessary for our survival?

The “physicalists-materialists” believe that there is nothing more to a reality beyond matter and energy as construed by classical physics and western science.

This position holds that the only way to gain knowledge is through empiricism, observations, and laboratory experiments.

Other “ways of knowing” contrast this scientistic view, such as spirituality, religiosity, preternatural, supernatural, or supersensitivity.

Scientism denies any inner or beyond this material world aspect, such as the concepts of consciousness, that is divorced from the physical matter and energy as perceived either directly or indirectly through the five senses.

The followers of this dogma create a sharp distinction between the objective and the subjective.

Scientism considers consciousness as nothing more than an epiphenomenon that arises from physical-chemical processes taking place in the brain, a product of its activity.

The alternative extreme view is that consciousness exists outside of and beyond matter, infusing the universe and making matter manifest.

“I propose that the universe exists as formless potential in myriad possible branches in the transcendent domain and becomes manifest only when observed by conscious beings.”

Science and Spirituality need each other!

Aside from reaching the conclusion that consciousness may be prior to matter as proposed by the quantum mechanical point of view, Erik Verlinde of the Institute of

Theoretical Physics at the University of Amsterdam proposed another theory of the universe.

Recommended: 8 Ways To Care For A Highly Sensitive Person

His new theory of gravity is based on the concept that the universe is essentially a holograph where the structure of space-time emerges from information.

Verlinde elaborated that the most fundamental aspect of the universe is information that can be equated with thought or mind or mental constructs independent of any material everyday conception.

He further added that the universe of mass and energy and forces may have had its origin in a thought that inserted information into an otherwise blank holographic system, which expands and changes when inserted with more thoughts and more information.

The bottom line to all of this is that consciousness can exist independent of matter and even exists prior to matter.

This may appear as diametrically opposed to dogmatic scientism, but this greatly acknowledges that there is more to reality than can be perceived by the five senses backed by gaining knowledge of ways that go well beyond the five senses, beyond scientific method.

That’s why we need philosophical, religious and transcendent experiences accompanied by the knowledge that those experiences bring, so we can go beyond our senses.

When one limits their understanding only to the material physiology, they can never understand the ultimate nature and meaning of the universe.

That’s why science and spirituality need each other, so both of them can advance.

Our ancestors have already developed these hidden senses!

Even human beings have developed senses that peak a glimpse of this hidden reality but they are being forgotten by society.

These dormant senses helped our ancestors realize truths about reality a long time ago, that is just being discovered and proven by science today.

Recommended: 5 Signs You Are An Extremely Strong Yet Highly Sensitive Person

We all have inherent powers that were expressed through the ages by a variety of contexts.

These latent powers are highlighted in various forms of paranormal and parapsychological experiences expressed as telepathic interactions or psychokinetic interactions.

The most fundamental way to connect directly to the universal consciousness is telepathy. It’s considered a silent prayer used in communicating with one’s God.

Despite being dismissed by scientism, numerous techniques continued to be cultivated and elicited paranormal experiences by different religions and cultures.

These rituals are applied by the tribal African societies, the yogis, Zen practitioners, shamanism, seances, western occult, and esoteric studies.

Each may differ in its practice, but at their core, they elicit complementary ways to gain access to legitimate knowledge that goes well beyond the five senses.

Maybe by going beyond our 5 senses, through our hidden senses and spirituality we will unlock the full potential of our DNA and evolve even more.

Maybe that’s how we developed the 5 normal senses in the first place, by going beyond the ocean, into the land.

Maybe that’s how we become light beings and upgrade humanity to new heights.