Home
SPIRITUAL LIFESTYLE
This is Why Every 7 Years Our Life Course Changes! 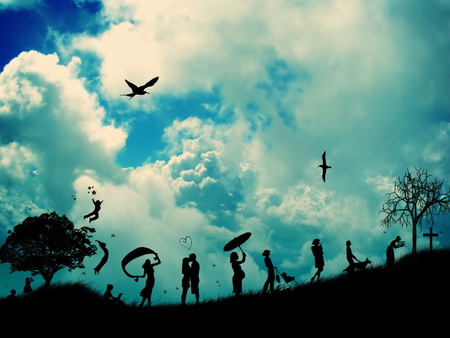 Every seven years all the cells of our body are renewed.

At the end of the 7th year, everything has changed in us, just as the seasons change. The line of life begins at birth and ends with death. After 70 years, the circle is closed. That circle is divided into 10 parts.

During the first 7 years, the child is focused on himself, as if it were the center of the world. The whole family revolves around ready to satisfy his every desire and if he does not, the child throws a tantrum, falls prey to anger. In its first seven years, the child is a perfect egoist.

After 7 years, there is a change: it is no longer concentrated on itself and moves towards others, posing a lot of questions. Bores his parents to death, becomes a living torment because it becomes more and more a philosopher, a skeptic researcher who wants to penetrate into things.

His interest is directed at others but only on those of the same-sex. Psychologists call this the second seven-year “homosexual” stage.

After 14 years of age, opens a new door: the interest in the opposite sex. This is the period of heterosexuality.

Sexuality is mature, the boy/girl begins to think about sex, and in its dreams are dominated by sexual fantasies. There begins the courtship, making its entrance into the world.

Recommended: 5 Lessons You Can Learn From A Tree

Starting from the 21st year, if everything has evolved to normal, the young man/woman begins to take an interest in more ambitious goals and a little less on love.

Wants material goods, success. it manifests the ambition, how to compete and fight to make a career.

His whole being is attracted by power, prestige, and on how to obtain them.

At about 28 years, we understand that we cannot get everything we want. We realize that many of our desires are impossible and will start to focus on the possibility of opening another door.

We’ll focus on the comfort and security rather than on adventure and ambition. At 28 ends the life of a “carefree”.

Now is the age at which you become framed. It is thought to open the bank account, to take home, to take out insurance, well, we think about settling down.

At 35 the life energy reaches the point Omega: half of the circle of life is complete. From this moment begins the energy decline.

Now we are interested not only the safety and convenience, but we also become conformists. What can destabilize or disrupt our lives becomes taboo.

Recommended: 5 Extraordinary Things You Learn When You Step Out Of Your Comfort Zone

As of now, we become part of the conventional world: we begin to believe in traditions, in the past, in religion. Now the rules don’t scare us anymore, order and discipline become part of our world.

Starting from 42, begin the physical and mental disorders. The decline begins.

This is the most dangerous age, one that undermines. The hair turns gray, they begin to fall, the skin gives way under the force of gravity.

Around 42 years we will begin to devote seriously to religion. We feel the need to believe in something supreme and meditate.

At 49 begins the sexual decline and with it all the guilt that comes with it.

Society puts a lot of pressure since it requires an active sexual role and a man begins to feel guilty or to blame the partner because it does not have all the reports that society “says” it should have.

At 56 years and we start to lose interest in the others, to the formalities and the company. It begins the gradual process towards the Sannyasin or the quest for truth.

Begins the climb to the concentration on ourselves, which comes to a head in 63 years. Now we are like children. We only think of ourselves.

Recommended: 5 Life Lessons to Learn From The Alchemist

We enter the inner life, just as in childhood, but enriched in knowledge, maturity, and ability to understand. It’s also the time when we are preparing to death internally.

Which is not to wait to die, but be ready to die with calm and serenity, knowing that they had come to the world to learn from others and from ourselves.

At age 70 we should be prepared. If life has followed a natural pattern, before death, just nine months before, we will become aware that death is coming.

As well as the fetus took nine months to see the light, so you will become – nine months before – aware of death: now it enters back into the uterus, the one inside us.

The Indians call it “Garbha” and is obviously symbolic. Our emplacement and our inner receptacle, home to our inner God, since forever.

This natural process is the cycle of life!