Home
SPIRITUAL LIFESTYLE
Your Favorite Song is Rewiring Your Brain: Here’s How Music Is Changing You 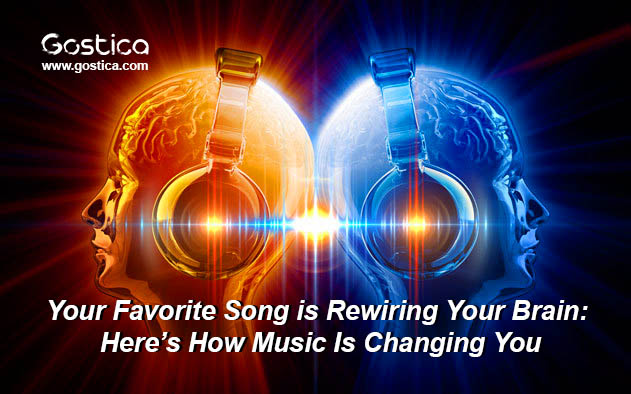 Listening to music lifts our spirits.

It truly is a Universal language, as well as a spiritual one. We can sense this intuitively without knowing the science behind it. We play our favorite song on our smartphones, and a

smile ignites across our faces.

But, even with its obvious sway over us, we may not realize that music is reorganizing our brains just like an adaptogenic herb, or a session of meditation.

Adaptogens are herbs that can reorganize cells in our body – they adapt to our greatest needs – be they stress reduction or the boosting of our immune system. It seems music can do the same thing.

Music was likely invented for human enjoyment in Paleolithic days, but the music of the Universe, what the Pythagoreans called the “music of the spheres” is likely as old as the Universe itself.

NASA has even recorded the “song” of the Earth, and each planet is said to have its own musical vibration.

Similarly, the ancient Greek initiates understood the therapeutic benefits of music, which were likely gleaned from the Egyptians.

Early Chinese, Tibetan, Hindu, Persians, and other cultures all knew scales which were meant to induce certain hypnagogic states – but we really have no idea how far back the use of music goes into human history. Even Neanderthals could sing or chant. Undoubtedly music has been an essential evolutionary tool – but how exactly is it rewiring your brain?

They found that when subjects listened to songs from their preferred musical genres, they exhibited enhanced levels of brain connectivity. This brain state – called full-brain or whole brain processing – allows deeper creativity, happiness, and cognitive functioning.

The study reports that the biggest change inspired by music was noted in the resting-state network associated with internal peace, or “the introspective and adaptive mental activities in which humans spontaneously and deliberately engage in every day.”

This brain area allows us to day-dream, use right-brained creativity to solve left-brain-created problems and to practice greater empathy and self-awareness.

Recommended: If Music Gives You Goosebumps, Your Brain Might Be Special

Another study states that this brain area called the default mode network (DMN) is like “a toggle switch between outwardly focused mind states and the internal or subjective sense of self, this network appears to include mind-wandering experiences such as imagining the future, the discovering of new possibilities (hopes), and the affective significance of aspirations or dreams,” regardless of our listening preferences – from Beethoven to Mos Def, if its music we love, it’s rewiring our brains.

What’s more is that listening to a great song allows us to process psychosocial interactions and utilize divergent thinking – the very state of mind that is being coercively and covertly manipulated out of us by the Deep State.

Even more fascinating is that music therapy – the simple listening of beneficial sound waves – can regenerate the brain, improving memory, and acting as a tonic for the brain, even in tiny babies.

Researchers propose that music modulates the secretion of steroid hormones, which ultimately incites repair and regeneration of cerebral nerves.

The more plastic our brains are – the more moveable – the more we can adapt to stressors we face in our every-day world.

Is it any wonder that we’ve loved music as long as we can remember, and that even our cellular memory tugs at us to listen to our favorite song?

Now the research behind how music affects our brain makes the fun of listening to Bob Marley’s “One Love” on top volume in our cars make plenty of sense.