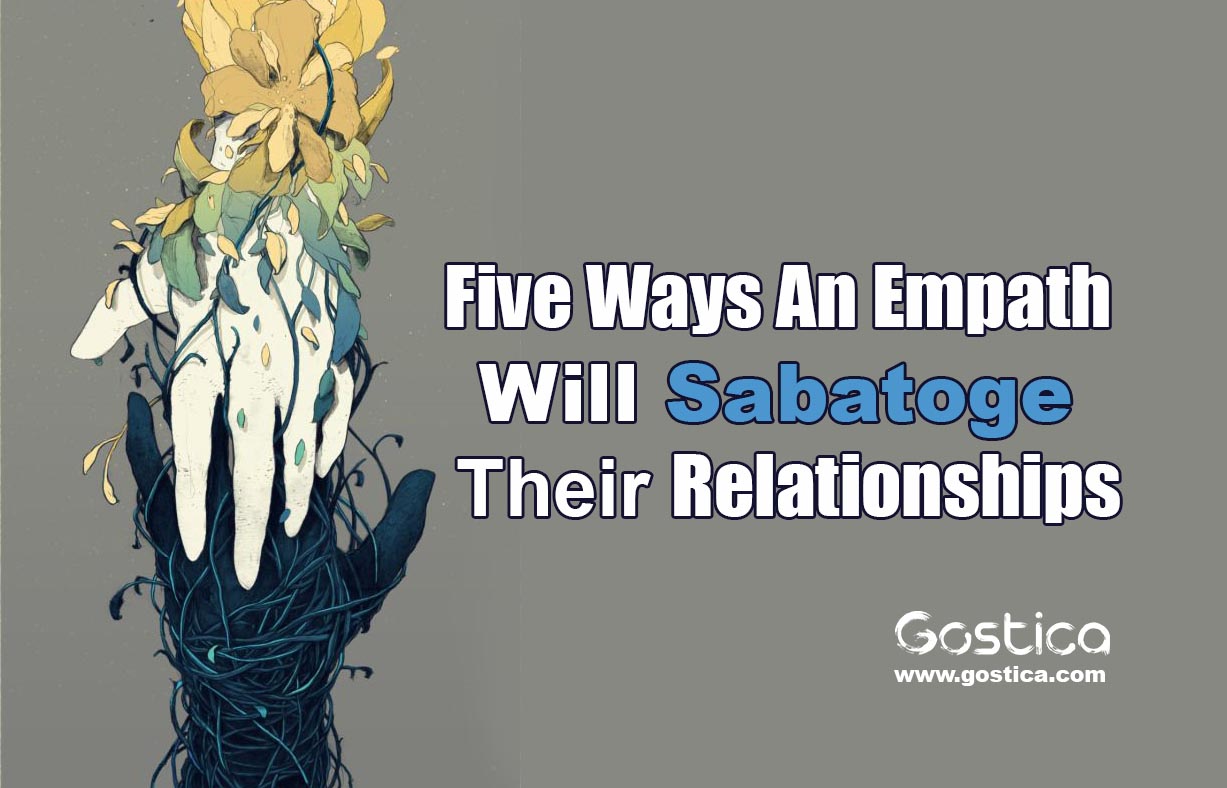 Being an empath is a difficult thing. It can change the way that you relate to others, and even to yourself.

While one might expect an empath to have an easier time than others in navigating the emotional terrain of a relationship, the opposite is usually true.

Because the mind and heart of an empath function differently, their relationships can often fall into atypical patterns.

Some of these are healthy, and others are not. In the end, an empath is more prone to experiencing certain relationship problems than a non-empath might be. They will also respond to these problems in ways that are unusual and not always healthy.

Here are five ways that an empath might sabotage their relationships:

1. They will compromise their boundaries without their partner asking them to do so.

An empath may feel their partner’s needs so profoundly that they give in to them in ways that hurt themselves. They might decide to negate a boundary that their partner would never have asked them to cross.

When they make this sacrifice without their partner knowing, the empath opens their heart to anger and resentment. Their partner most likely will not understand what has happened. They will feel deeply frustrated and confused as a result.

2. They will stop expressing their own needs in the relationship.

An empath may become so focused on their partner’s well-being that they neglect to care for their own. An empath is prone to forgetting the importance of expressing their own needs and seeing that they are met.

Recommended: Why Empaths Attract Toxic People (And How To Break The Cycle)

This can put a dynamic into motion that is similar to the one described above. The empath will feel unloved and neglected when their needs are not met, and their partner will not understand how to meet them.

3. They will neglect their self-care.

Once again, an empath’s deep concern for others can come at the expense of their own emotional well-being. If an empath becomes too focused on their partner, they may begin to neglect the things that make them who they are.

This might entail spending less time with friends, less energy on hobbies, and less focus on work that they find important and meaningful.

As a result, their happiness and self-esteem will suffer. Their partner will wonder why they have changed. This is often the end of the relationship.

4. They will foster a parent-child relationship.

Empaths are nurturers. They will often seek to meet the needs of their partner before they even have a chance to express them.

This can turn into a dangerous dynamic of one partner caring for the other in a one-sided relationship. The empath will become resentful at their obligations.

Their partner will begin to feel resentful as well, at their loss of autonomy. This dynamic is not healthy in a relationship between two adults.

5. They will solve important problems in their own head.

It is not uncommon for an empath to have a running dialogue in their head, taking on both sides of the argument. Often, an empath will resolve the dispute internally, without ever bringing their issue to light.

This process may get rid of the problem, but it creates many new ones. It is unfair to the empath’s partner, who is likely not even aware that a conflict has taken place.

It robs them of their autonomy, their chance to defend their viewpoint, and, most importantly, the opportunity to understand where their empath is coming from.

“Empaths did not come into this world to be victims, we came to be warriors. Be brave. Stay strong. We need all hands on deck,” wrote Anthon St. Maarten.
Don’t fall victim to your own inherent vices. Learn to identify the behaviors above, and fight against them. The fate of your relationship may depend on it.