Home
SPIRITUAL LIFESTYLE
The Opening Of The (9-9-9) Portal 9 September 2016! A Good Chance To “Restart” Your Life

September is the ninth month of the year and from the esoteric numerology point of view it relates to endings and new beginnings. In the symbolism of numbers there is no difference between the 1, the beginning of the cycle, and the 9, the end of the cycle, as both are represented by a circle with a dot at its centre. Energetically though the difference is substantial, as they convey a completely different intent and aim.

Numbers are awareness, they bring with them the frequency through which life manifests itself and our numbers reflect the consciousness we were born with in order to manifest our soul mission and purpose in this life.

Everything starts from the 1, an act of Will and Power, born out the great potential, which is the 0. The 0 may be compared to the Kabbalistic Ain Soph Aur (meaning “Limitless Light”), which is the state of all things before they make their initial manifestation – it is the ultimate cause of matter and force. 0 has no beginning and no end, it is the complete totality, the primal cause of existence and it holds the potential, which is the energy of what it might be.

The Will or Power to manifest comes with number 1. The 1 is a shoot number from no number, it carries the creative energy, the flash of light coming out of the void in order to start the cycles of manifestation through all the numbers up to 9. Number 9 indicates the end of the lesson and it makes the way for a new one. The will represented by the 1 has gone through the different experiences expressed by 2, 3, 4, 5, 6, 7, 8 in order to gather the wisdom of the experience and rise to a new level of being, a new level of consciousness in the 9. 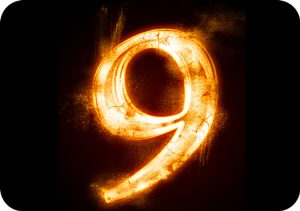 The difference between the 1 and the 9 is that after having experienced all the different numerological cycles, we have cleared the original idea from all the personality attachments and in the 9 we may become our true Soul. It is by going back to the potential, the 0, that we find the new beginning: as we become ourselves, our soul, the personality (thinking, feeling behaviour) passes away.

For this reason the 9 is the one that ought to be acting from Soul. Soul contains all the memories of the previous experiences, everything that has happened so far, so that it can be understood, digested and brought to a new level of consciousness in the next stage of our life. When we experience the 9 energy, we have to let go of our personality needs and act in the new direction emerging from within.

The very interesting thing is that this month, which already holds the 9 energy, we will experience three 9-9-9 portals in order to speed up the process of change already triggered by the energy of year 2016. These three portals of the 9-9-9 that will open on 9, 18 and 27 September, will accelerate our process of awakening the energy of the soul allowing the light to reach our hearts. They will give us the opportunity to transmute the effects of the internal conflict in a new understanding. 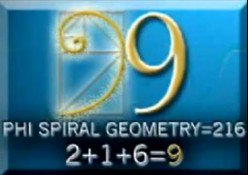 2016 is a 9 (2+0+1+6), an ending of the past, of what we have been or we thought we were, in order to open up to the new. It holds the energy of the 20, which means Gestation and Giving Birth, and the power of the Tower, the sixteenth Tarot card in the Major Arcana, described as “The Road to Damascus Experience”, which is the crumbling away of all the old beliefs so that Spirit can reach the Heart of man.

In the process there is no possibility to negotiate or question, as the response of the redeemed can only be the obedience to his soul, because when God truly touches our hearts, our only response can be, «Lord, may your will be done and may you use me to do it.»

9-9-9 is 27/9. Number 2 is the inner emotional conflict of the personality, while number 7 is the new order coming from the soul (9). In esoteric numerology 27 is called “Birth of Wisdom”, “Wisdom through Feelings” expressing the heart of matter fusing with the Light of the soul.

PLEASE SHARE WITH YOUR FRIENDS AND FAMILY THE OPENING OF THE 9-9-9 PORTALS!