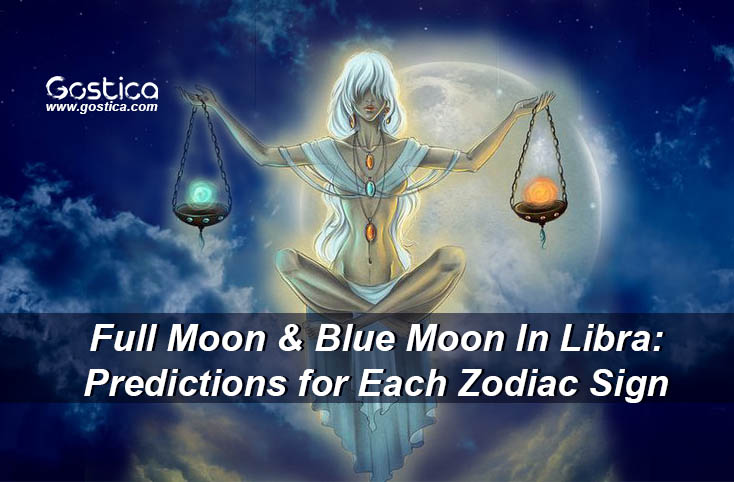 General Predictions for the Blue Moon in Libra:
On the 31st of March 2018, at 12:37 UT, the Moon in Libra accurately opposes the Sun in Aries, forming the second Full Moon of the month. A Blue Moon.

Mars and Saturn, as we’ve seen are both in Capricorn and in a conjunction. Right now this conjunctions is in its strongest days. It will become accurate on the 2nd of April, but it will affect strongly the whole waning Moon period.

In actuality, most of the energies of the period are caused by this aspect or focus on this aspect one way or another. Also, keep in mind that the slow-acting Saturn now literally slows down, as it’s getting ready to turn retrograde. Thus, the tension between Saturn and the fast acting Mars becomes greater.

The Retrograde Mercury in Aries will stop pressing Pluto in Capricorn on the 2nd of April, but it has already started pressing Saturn, Mars and their conjunction. As we’ve seen the two planets don’t communicate very harmoniously.

Now, with both in a square with the Retrograde Mercury, the disharmonious conjunction becomes even more chaotic. It’s worth mentioning that on the eve of the New Moon Mercury will turn in direct motion again.

Sun’s role will be both auspicious and inauspicious. It squares with Saturn, Mars and their conjunction lose power day by day. Also, it is in conjunction with Mercury.

The day after the Blue Moon, this conjunction will is perfect, but it will be active until the Third Quarter. This reduces some of the “bad luck” the Retrograde Mercury produces, and therefore, the stress it posses on the Saturn-Mars’ conjunction.

On the other hand, on the very same day of the Blue Moon, the Sun starts squaring Pluto in Capricorn and it will continue doing so until a few days after the Beltane. This square will become accurate on the 11th of April.

The good news comes from Venus. Venus will have stop squaring Pluto by the 2nd of April. It has stopped squaring Saturn and Mars for some days now. Even more, on the day of the Blue Moon, Venus enters Taurus and from there it blesses Mars, Saturn and their conjunction via triangles. In fact, we may feel these blessings even a few days before the Blue Moon.

Venus’ triangle to Saturn will become perfect on the 7th of the month, the day before the Third Quarter, and it will remain active until the eve of the New Moon.

The Retrograde Jupiter from Scorpio will continue supporting Pluto, of course. As we’ve said, this hexagon will stop acting early November.

At the same time, Jupiter’s weak triangle to Neptune now acquires a considerable strength. It’s the strongest period will be from May to September, but from this Blue Moon and afterward, we’ll be enjoying this beneficial influence. On the relatively negative side, the Retrograde Jupiter will start opposing Venus from the 9th of the month onwards.

So, what do all these mean?

The stressful influences of the waxing Moon period are, more or less, present during the waning Moon, as well. The tension and stress produced by external circumstances will be lesser, and that’s good.

On the other hand, the one generated by our psych will be greater. On this regard, it’s a good tactic to support our self on a daily bases. The mantra for pleasure and happiness can help us do that. It will also make good use of the very strong healing energies that surround us during this period.