The Uranus in Taurus transit, in effect for the next 7+ years, will push the hands of fate to release an important wake-up call BULL STYLE.

A new energy is about to charge in and it’s forcing our wheels of fortune to start spinning. Where they stop next will have a lot to do with Uranus’ radical sign shift beginning on May 15, 2018. It’s wake up time and I suggest getting our eyes ready to adjust to seeing things from a new perspective. Some of us will gain in unimaginable ways with extreme highs—while others will plummet into extreme lows.

The game of life is about to intensify in more ways than one.

Many of us will shift the entire course of where we are going as a result of this important planetary move. It’s exciting and scary all at the same time.

Whatever happens next will, of course, be something we never thought of. Uranus is known for delivering the unexpected. He’s wild and likes to keep us guessing up until the very end. When he delivers we’ll be blown away by the results. Uranus is funny like that. He will never – ever,  reveal what he’s up to till it’s too late to change course.

Given that Uranus changes signs only every 7 years or so, major shifts take,e place when he makes a big move. These shifts are felt on both a personal and global level. Planets that move slowly usually pack the biggest punch.
Recommended: 6 Signs You Are Feeling A Spiritual Shift
On a personal level, the Uranus in Taurus transit will shed light on what area of our life needs some radical change or wake up call. While on a global scale, we’ll be seeing themes come about that will be necessary to keep our evolution going. And those themes will revolve all around the sign of, Taurus.

Uranus is the great awakener and soul shaker. He likes to open our eyes really wide to see things in a totally new way.

Before I get into the specifics let me begin my Uranus tale by saying that this planet is a true Wild Card. He’s brilliant, chaotic and catastrophic all at the same time which is quite a bill to fulfill. Uranus demands freedom from the status quo and won’t stop for anyone that gets in his way. His MO is changing or be changed—without the courtesy of being asked.

The irony of the Uranus in Taurus transit is that Taurus hates change. Taurus is a sign that is fixed in her ways and doesn’t want to budge for anyone. I can already see a dilemma building.

What happens when you mix a wildcard (Uranus) with a bull (Taurus)? My answer is a ferocious cocktail– shaken not stirred….that’s what!

Ready or not–something radically different is approaching and what happens here will surely go down in the history books. Uranus is a show stopper. When he wants to shake things up – he does it in very powerful ways. Change or be changed is the bottom line.

Some Themes We Can Expect to See With the Uranus in Taurus Transit:

Since Taurus rules over money and banks we will likely see major fluctuations in how we are using both of them. We’ve already started to see a shift of usage of cash across the world.

Recommended: 10 Signs You May Be Experiencing A Shift To A Higher Vibration

A ton of attention has been going into the unregulated realm of bitcoins and digital currencies as well … and we will likely see quite a bit more for both better and worse. Certain financial systems may need to be broken down in order to be built back up in a different kind of way.

Changes in What We’re Spending Our Money On

Given that Taurus appreciates value, questions surrounding what’s important and what’s not will likely begin to crop up more and more.

Social Security Reform in the USA & Other Long-Term Securities

With an emphasis on our ‘wealth’ and safety nets (Taurean themes), we can expect systems that provide security to go through some sort of change

We all know that the Earth has been mad for quite some time. The human race has been using and abusing her for far too long and she’s been voicing up.

Expect to see more wild weather patterns as a result of the Uranus shift through the earthy sign of Taurus. An important wake-up call into what we’re doing to our planet will become apparent.

Important developments and advancements – particularly with cattle, will likely surface given that Taurus is the sign of the bull.

We could also see higher rates of home gardens for food consumption. More and more people may opt out of eating meat and adopt more meatless diets (which we’ve already started to see).

How We Use Resources

More and more people may delve into a ‘waste not want not’ way of life. Less may be more and quality will supersede quantity.

The moment a planet enters a new sign a scene is set for what happens next. In this instance, I’ve set the stage for Washington DC but we could change it to any country’s capital.

This is an important picture for the developments of what the Uranus transition means for each country. In this case, I want to just focus on a few key points.

Uranus will be changing signs right after the peak of the May New Moon in Taurus signaling that something ‘new’ is coming onto the scene. This something new will likely CHARGE in rather than quietly knock to see if we’re ready.

A New Moon happening right alongside a major planetary shift also heightens the probability of a big* event happening. In addition to the New Moon, Mars will be in the critical 29th degree making a fierce square to Uranus.

Not to be tired but I’m watching for something volatile and potentially explosive around this time. This picture indicates that Uranus won’t tiptoe into his new sign quietly – he’s going to charge in like a wild animal.

*Side note …. Uranus is known for creating big events when he changes signs. The last time he changed signs, one of the world’s worst disasters took place. Upon Uranus’ transition into Aries on March 11, 2011, Japan experienced one of their worst national disasters of all time. They were tragically struck by the world’s 4th largest earthquake, a tsunami AND their nuclear reactors almost exploded. 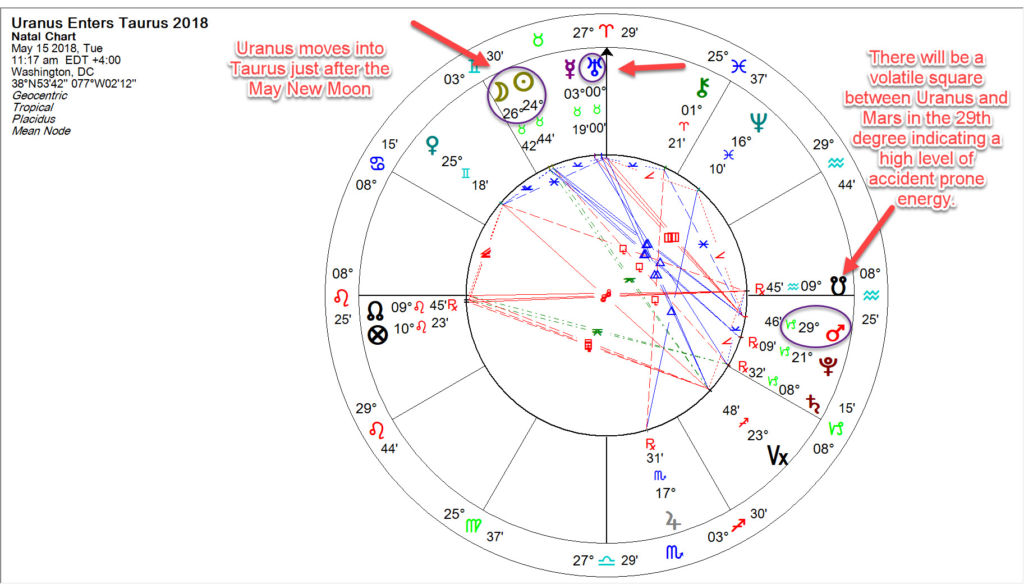 The truth of the matter is that things have already been happening to set the stage for what comes next. Whatever ultimately comes out of the Uranus in Taurus transit was actually set into motion a long time ago.

But there is no denying that BIG change is a-coming’. By the end of it, we’ll all likely feel a little like Dorothy when she landed in Oz.

If you’re interested in how this Uranus in Taurus transit will be affecting you over the course of the next 7-8 years check out my Member Horoscopes.

Everyone, in some shape or form, will experience a change in some area of their life as a result of this monumental shift. It’s a shift that most of us will only experience once in a lifetime.

As a result, we’ll all walk away with important memories resulting out of it. Use it to your advantage and discover more about the personal themes about to be shaken up in your life. A totally new way of looking at things is about to come out of it