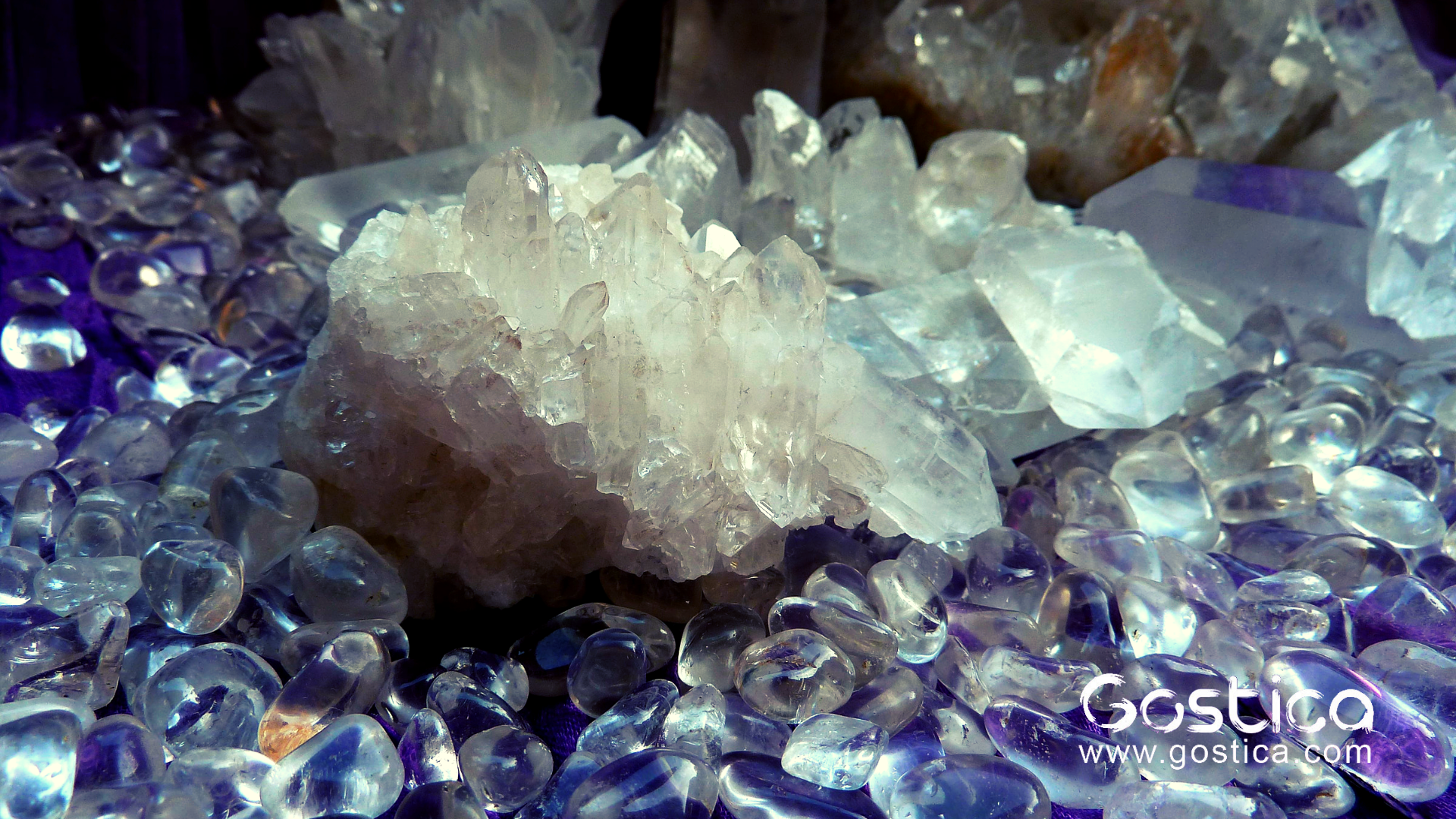 The conversation about crystals is so loaded with words like energy and high-vibe that you might not think to reach for one when you need to unwind or quell feelings of anxiousness. But in the world of woo-woo, there’s a crystal (or 10) for everything—inspiring abundance in your life, creating amorous vibes, and, yes, self soothing.

There is in fact, an entire category of crystals and stones dedicated to relieving stress and easing anxiousness. They’re fittingly known as calming stones. To be specific these are stones that “settle the spirit down,” according to co-founder of holistic lifestyle brand Energy Muse and author of Crystal Muse, Heather Askinosie. “These stones connect with our energy field in a way that helps us to cleanse and get centered,” she says.

Part of the reason anxiety and stress can be so consuming, draining, and seemingly inescapable is because of the cycle of spiraling that often ensues. Askinosie says that “tuning into the energy of a calming crystal inhibits thought spirals before they crash.”

Simply having a physical object that you create a sense of ritual around can help your mind focus on something else. Below, Askinosie explains which crystals—generally, ones that are blue-hued and connected to the third eye chakra—make ideal calming stones.

Recommended: A Guide To Healing Crystals: 10 Most Effective Healing Stones

Here are 7 calming and stress-relieving stones 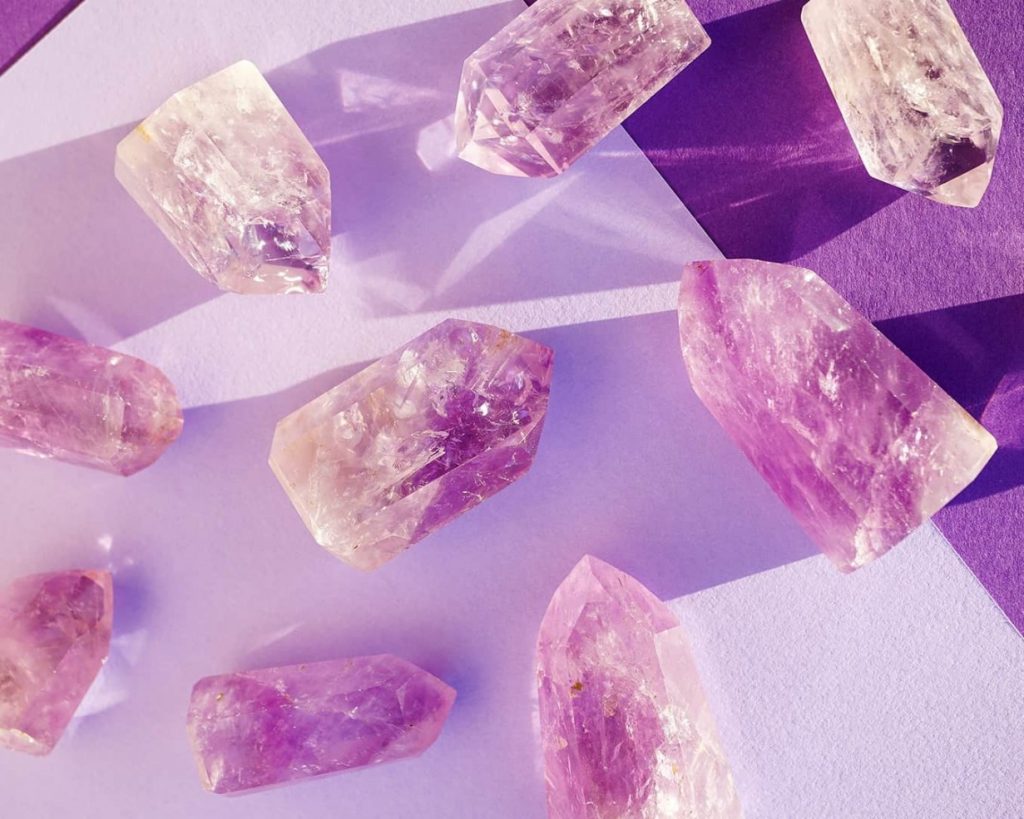 Known in woo woo parts as “the intuitive eye,” amethyst is a purple crystal you can find in abundance. If it seems to show up in every other Instagram or celebrities home, its likely because of its reputation for having relaxing energy and being sleep enhancing.

“Amethyst fuses with the crown and third eye chakras to send peaceful vibes straight to where you need them” Askinosie explains. “Not only will it relax the mind, it also brings clarity so that you can better understand whatever situation may be causing stress.” 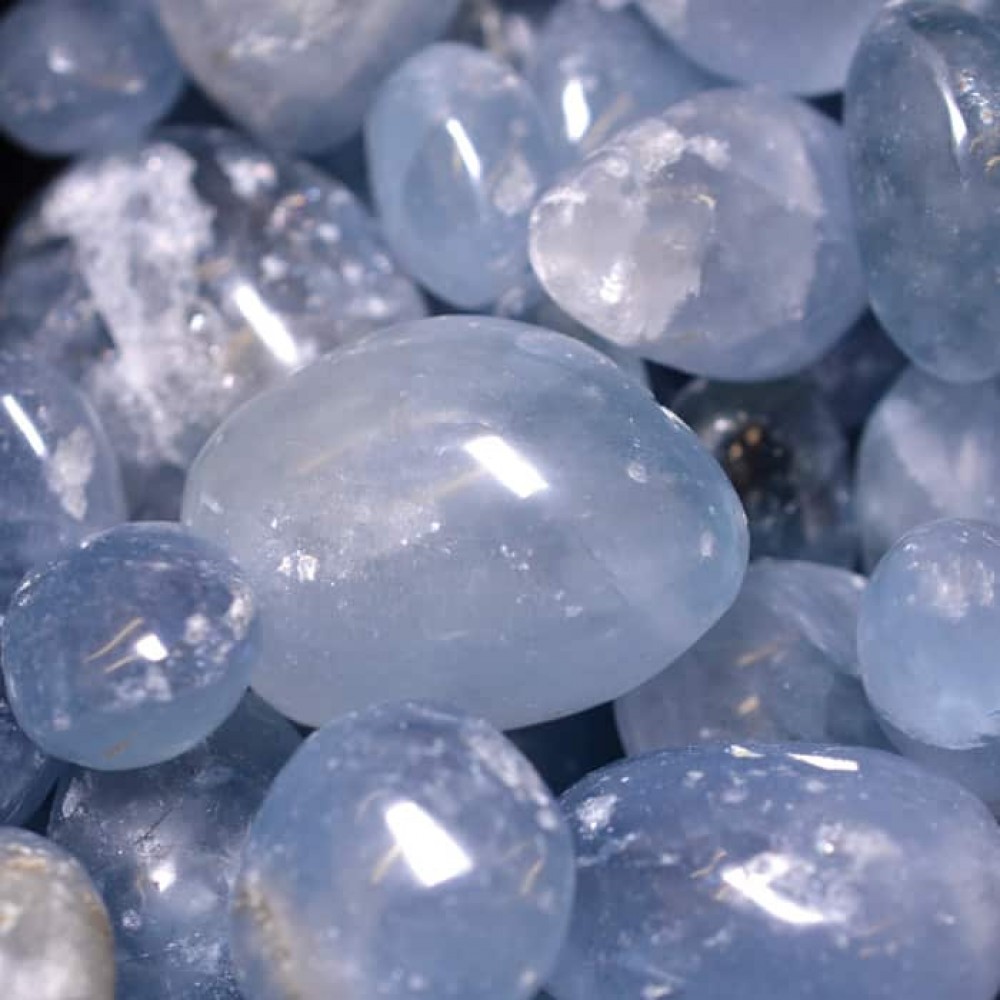 “Celestite is a high-vibrational stone that blasts away those chaotic thoughts that keep you from attaining a clear headspace,” says Askinosie. Far beyond its soothing blue hue, celestite is believed to connect to your third eye, heart, and crown chakras—a trifecta that encourages “the highest realms of serenity,” she explains.

The overwhelmingly soothing energy of celestite facilitates intuition and communication, which in turn create a sense of safety and calmness, allowing you to let go of your fears and give in to release. 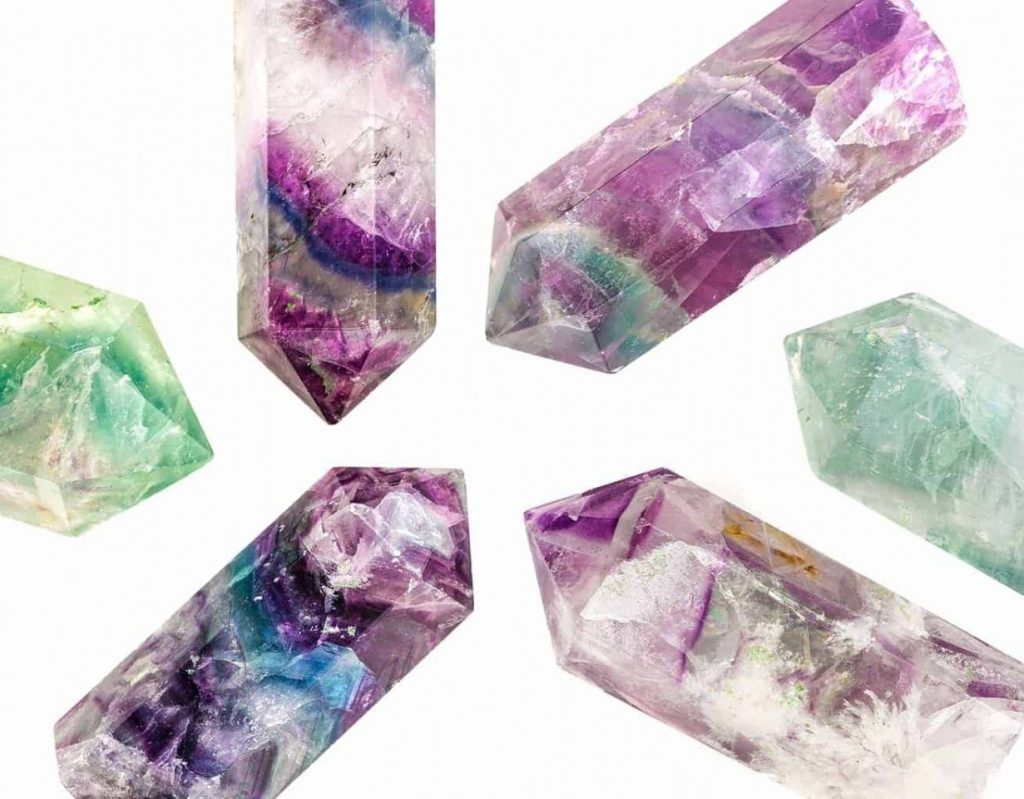 The main reason fluorite is a pretty popular crystal is because it’s commonly associated with balance and clarity. When you’re under duress, the purple-and-greenish blue stone can be helpful as its thought to banish negativity and replace it with a rational and clear mindset.

Recommended: How To Heal Your Chakras With Crystals (Infographic) 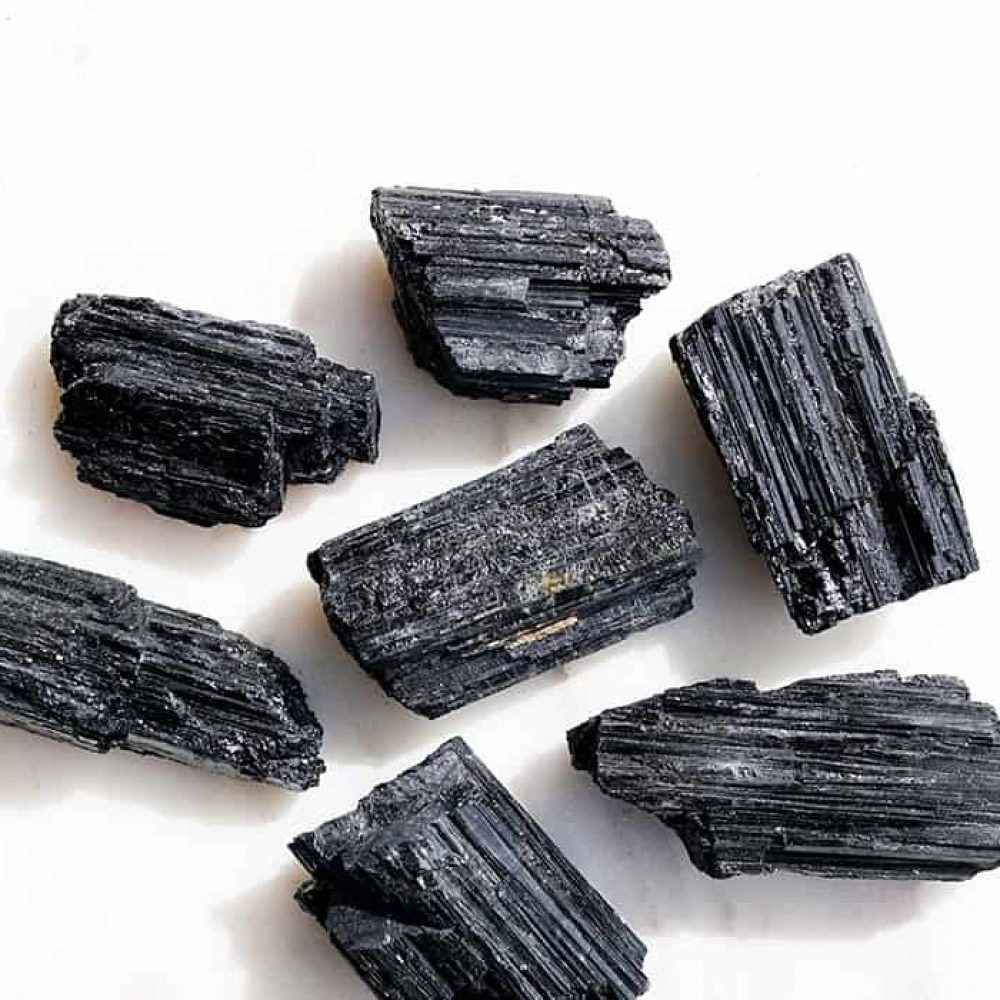 Askinosie says that while amethyst, celestite, and fluorite are the “rockstars” of calming stones, one that tends to fly under the radar is black tourmaline. ‘It’s thought of as a protection stone, but that’s actually what makes black tourmaline an effective crystal for calming” she says explaining that the stone “helps you build up boundaries between yourself, and the situations, thoughts or people that weigh negatively on your energy.”

When you’re able to cleanse and protect yourself from these influences and sources of negative energy, you can make space for calmness, clarity, and centeredness. 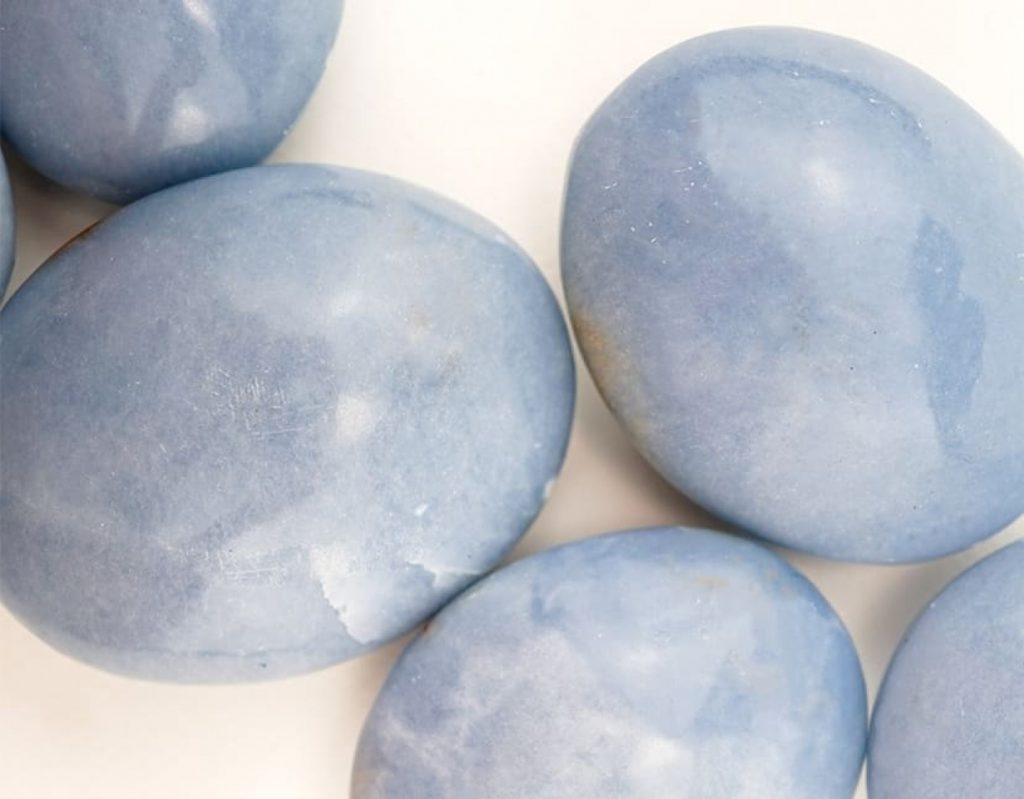 The name of this stone is no accident—the energy of angelite helps you remember that you’re not alone in the world. Using it as a touchstone can help you relieve stress, anger, and tension. 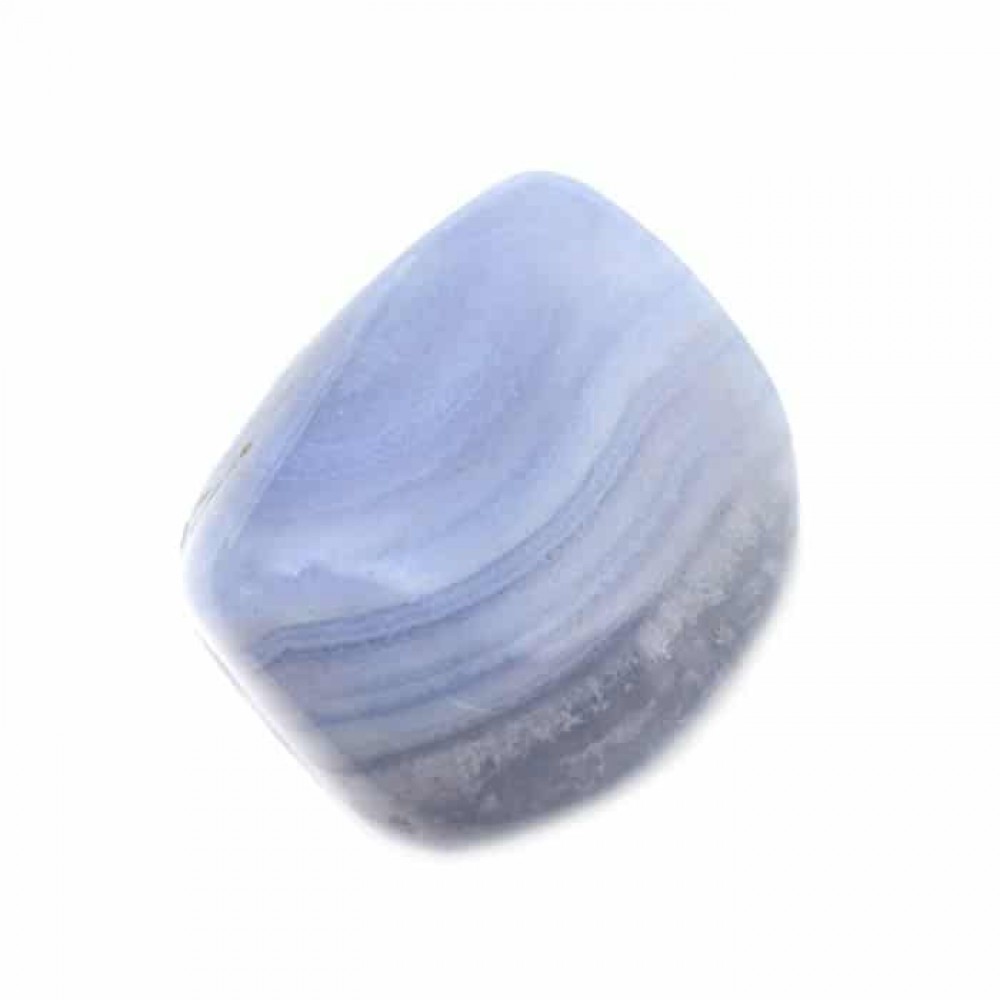 A stone that looks like a physical incarnation of the ocean, blue lace agate is immediately visually soothing. It’s also known to have an especially strong ability to calm the mind. To make the most of the stone’s power, Askinoise says to hold it in your hands, close your eyes, and take three deep breaths. 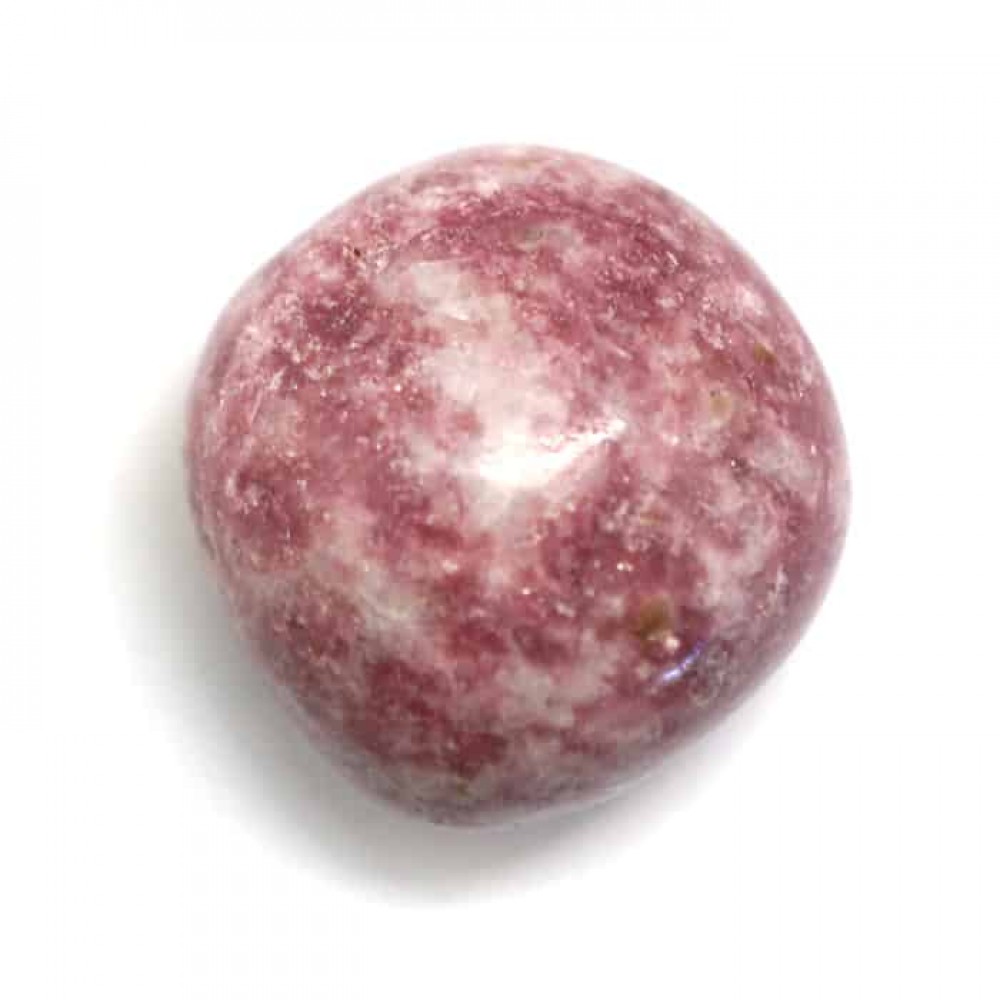 Lepidolite is a stone best used right before you go to sleep. As you’re getting ready for bed, Askinosie says to connect with the crystal believed to calm an overactive mind, help you find peace even in moments of stress, and allow you to access your dream state while sleeping.

Making the most of your stones

“You can program your stones for calming in the same way that you program any crystal—with an intention” according to Askinosie. To start, cleanse the stone in the smoke of burning sage, and then state your intention while holding the crystal or stone in your hands.

Recommended: How To Clear, Activate & Store Your Crystals

This article was written by Tamim Alnuweiri for Well + Good.