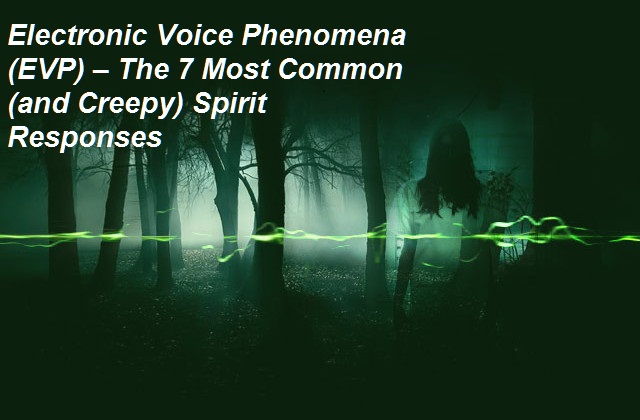 Haunting voices and whispered warnings seem to proliferate on T.V. ghost hunting shows. Electronic Voice Phenomena (or EVPs) that warn to “get out” or sound like an animal growling are common on these shows. But is that really what paranormal investigators are finding in the field?

First, what are EVPs? Parapsychologists define EVPs as telepathic communication between ghosts or spirits and the living, that occur in the form of psychokinesis or PK.

Typically, the EVP is not heard by our ears but heard later when the recording is played. It is believed that spirits are able to influence the recording device through PK to make their voice audible to us.

How long have we been recording EVPs?

The idea that we could communicate with spirit through electronic devices is not a new one. As early as the 1940s, American photographer Attila von Szalay attempted to record spirit voices using a 78 rpm record.

While these attempts were unsuccessful, he eventually switched to reel-to-reel tape recording and did capture EVPs. He published this work in 1956 in the Journal of the American Society for Psychical Research, with co-author Raymond Bayless, later known for his work on phone calls from the dead.

In the late 1960s, Konstantin Raudive, a Latvian psychologist, published a book on EVPs entitled, Breakthrough: An Amazing Experiment in Electronic Communication with the Dead (1968). Raudive andJürgenson made more than 100,000 recordings of discarnate entities, which he claimed were clearly identifiable voices of people that had passed on.

Since those early years, not all that much has changed as to how EVPs are recorded, other than that we often use digital recorders today.

In the last few years, I have also heard some very good EVPs that were recorded using Smartphones, so the cost and quality of the recording device have become less of an issue.

There is, however, a trend paranormal investigators are seeing in the type of EVP responses being recorded. EVPs generally follow a pattern, meaning that there are commonalities from one investigation to another in the kinds of responses we typically find.

What are the most common Electronic Voice Phenomena heard in field investigations?

By far, this is the most common (and disturbing) EVP heard. Where are these souls that they need to be rescued? One Medium I know has suggested that many souls are in a place similar to Purgatory and are asking for us to help release them.

Either way, it’s a bit disconcerting to know that this may be the case.

It is very common to obtain EVPs that state the name of the investigator and sometimes, the entire team while conducting an EVP session.

It’s not only very common for a spirit to answer your question “What is your name?” it’s also very helpful if you are working with a client that wants to know who is haunting them!

Of course, sometimes they play tricks and give you someone else’s name or a false name, but those spirit tricksters are pretty rare!

Another common EVP is to be told by the spirit to get out. I have had this happen and then had a great “conversation” with the same spirit during an EVP session, so it’s unclear if they really mean for us to leave, or if it’s a way of defending their turf.

6. Repeating a phrase you just said.

This is another very common EVP response. I recently asked spirit, “Are you happy with how they kept it [the family cemetery] up?” The response, “Kept it up.”

7. Saying a phrase just before you say it.

This one’s a bit trickier but does happen quite often. Just as an investigator thinks of a question, but before they ask it, spirit pulls a phrase from it or answers it.

It definitely supports the idea that ghosts or spirits communicate via telepathy! An example of an EVP might be, “I am here,” followed by the Investigator’s question, “Are you here?” This one’s also a bit creepy, but definitely not unheard of!

The downside of EVP session results is that they are:

2) Are frequently indecipherable. It’s definitely not a science!

It is only when you have an EVP response paired with a history of a haunting, witness statements and confirmation from a psychic medium that you are becoming close to having solid evidence of a haunting!

Have you recorded EVPs? Tell us about it in the comment area below!

Author: Dr. Carol Pollio is the Director of Intuitive Investigations, a paranormal investigation and earthbound spirit rescue organization. After a successful career as a Chief Scientist in a federal land management agency and having honorably served 31 years in the military, Dr. Pollio is now focusing on the field of parapsychology, blending her knowledge of scientific principles with her intuitive abilities and psychic mediumship skills. She is also a certified Parapsychological Field Investigator with the Office of Paranormal Investigations and an Elemental Space Clearing® Practitioner.