Look carefully at the cards, let yourself be guided by your intuition and choose your favorite.

Right in that card, there is a message that we hope will inspire you to take matters in your own hands right now in this moment, not later, not tomorrow, but now, because the time to act and improve your life is NOW. 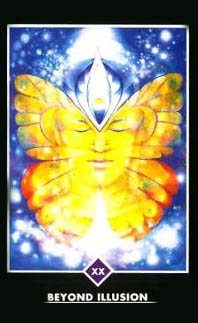 Commentary on the Card: The butterfly in this card represents the outer, that which is constantly moving and that which is not real but an illusion.

Behind the butterfly is the face of consciousness, looking inward to that which is eternal. That space between the two eyes has opened, revealing the lotus of spiritual unfoldment and the rising sun of awareness.

Through the rising of the inner sun, meditation is born. The card reminds us to look outside for what is real, but to look within. When we focus on externals, we too often get caught up in judgments – this is good, this is bad, I want this, I do not want that.

Recommended: What Karmic Theme Are You Experiencing This Week?

These judgments keep us trapped in our illusions, our sleepiness, our old habits, and patterns. Drop your opinionated mind and move inside.

There, you can relax into your own deepest truth, where the difference between dreams and reality is already known.

Meaning of the Card: This is the only distinction between the dream and the real; reality allows you to doubt, and the dream does not allow you to doubt… To me, the capacity to doubt is one of the greatest blessings to humanity.

Why have the people like Gauntam Buddha been so insistent that the whole existence – except your witnessing self, except your awareness – is just ephemeral, made of the same stuff as dreams are made of?

They are not saying that these trees are not there. Do not misunderstand because of the word “illusion” … it has been translated as an illusion, but the illusion is not the right word.

Illusion does not really exist. Reality exists. Maya is just in between – it almost exists. As far as day-to-day activities are concerned, it can be taken as reality. Only in the ultimate sense, from the peak of your illumination, does it become unreal, illusory.” 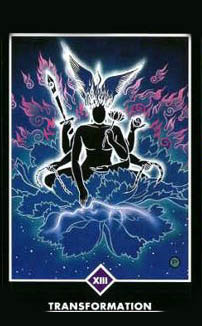 Commentary on the Card:  The central figure in this card sits atop the vast flower of the void, and holds the symbols of transformation–the sword that cuts through illusion, the snake that rejuvenates itself by shedding its skin, the broken chain of limitations, and the yin/yang symbol of transcending duality.

One of its hands rests on its lap, open and receptive. The other reaches down to touch the mouth of a sleeping face, symbolizing the silence that comes when we are at rest.

This is a time for a deep let-go. Allow any pain, sorrow, or difficulty just to be there, accepting its “facticity”.

It is very much like the experience of Gautam Buddha when, after years of seeking, he finally gave up knowing there was nothing more than he could do.

That very night, he became enlightened. Transformation comes, like death, in its own time. And, like death, it takes you from one dimension into another.

Meaning of the Card:  A master in Zen is not simply a teacher. In all the religions there are only teachers.

They teach you about subjects which you don’t know, and they ask you to believe because there is no way to bring those experiences into objective reality. Neither has the teacher known them–he has believed them; he transfers his belief to somebody else.

Recommended: Select The Symbol You Are Most Drawn To And Reveal This Week’s Message From The Spirits

Zen is not a believer’s world. It is not for the faithful ones; it is for those daring souls who can drop all belief, unbelief, doubt, reason, mind, and simply enter into their pure existence without boundaries.

But its language has to be understood, not with your reasoning and intellectual mind but with your loving heart. Or even just listening, not bothering whether it is true or not.

And a moment comes suddenly that you see it, which has been eluding you your whole life. Suddenly, what Gautam Buddha called ‘eighty-four thousand doors’ open. 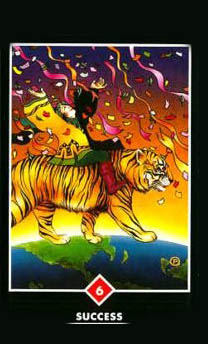 Commentary on the Card:  This character is obviously “on top of the world” right now, and the whole world is celebrating his success with a ticker-tape parade!

Because of your willingness to accept the recent challenges of life, you are now–or you soon will be–enjoying a wonderful ride on the tiger of success.

Welcome it, enjoy it, and share your joy with others--and remember that all bright parades have a beginning and an end.

If you keep this in mind and squeeze every drop of juice out of the happiness you are experiencing now, you will be able to take the future as it comes without regrets.

But don’t be tempted to try to hold on to this abundant moment, or coat it in plastic so that it lasts forever.

The greatest wisdom to keep in mind with all the phenomena in the parade of your life, whether they be valleys or peaks, is that “this too will pass”. Celebrate, yes, and keep on riding the tiger.

Enjoy both–don’t get addicted to one. Don’t say: I would always like to be on the peak. It is not possible.

Simply see the fact: it is not possible. It has never happened and it will never happen. It is simply impossible–not in the nature of things.