Home
SPIRITUAL GROWTH
Your Brain Is Not Your Mind: An Exploration Of The True Nature Of Consciousness 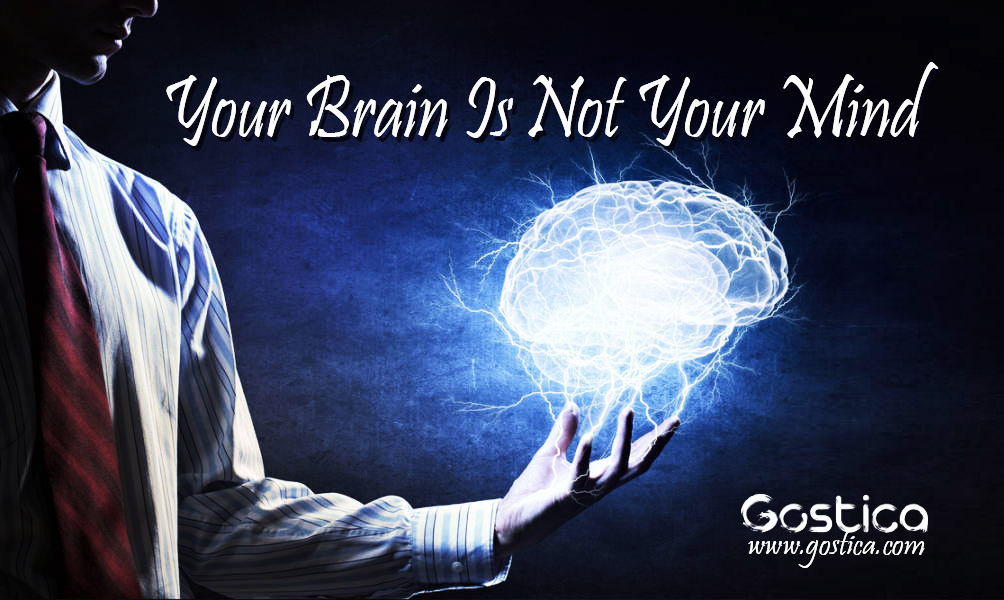 Our knowledge of the nature of the objects treated in physics consists solely of readings of pointers (on instrument dials) and other indicators.

(Therefore) what knowledge have we of the nature of atoms that renders it at all incongruous that they should constitute a thinking object?

(Thus) science has nothing to say as to the intrinsic nature of the atom. – Sir Arthur Eddington.

What do we really know about the intrinsic nature of consciousness and its essential role (if any) in the nature of cosmos? Probably a lot less than many would assume.

There is no question that our knowledge of brains has expanded massively in the past century. But what does all this data about brains really tell us about consciousness?

Not a great deal, I suspect. Yet mainstream psychology and neuroscience continues to ignore the obvious implications of the question: “Are brains and minds the same thing?”

Instead, these discourses tend to ignore the question, replacing it with an unquestioned presupposition: mind equals brain. Worse still, much of science still tends not even to bother with consciousness, intention, and the importance of the role of the perceiver.

Recommended: These Symbols Will Help You Rewire Your Brain

Ironically, the scientific detachment that was born of the awareness of the fallibility of the first-person perception has typically led to the dismissal of the role of the mind in nature, evolution, and cosmos.

Galen Strawson in a well-known paper entitled “Realistic monism: why physicalism entails panpsychism” points out some of the logical inconsistencies in materialist science.

Strawson is incredulous at the denial of personal experience which lies at the heart of the materialist worldview that still dominates much of science, especially biology, psychology, and neuroscience. This, he states, is akin to the denial of “the existence of experience.”

At this, we should stop and wonder. I think we should feel very sober, and a little afraid, at the power of human credulity, the capacity of human minds to be gripped by theory, by faith.

I find this grievous, but, next to this denial, every known religious belief is only a little less sensitive than the belief that grass is green.

Strawson is correct. What is it about the first-person experience that science is so afraid of? What has created this absurd rejection of the “I”?

We could, of course, run through the history of science in the past several hundred years, talking about the necessity to challenge religious authority on matters of reason, and the subsequent discrediting of theology or mysticism in providing adequate explanations of most mundane things (it has to be admitted).

We could also talk about the rise of more sophisticated ways of knowing such as calculation (e.g. Newton), classification (Darwin), analysis (Comte) and experimentalism (Helmholtz) by the mid-nineteenth century.

And we could acknowledge the massive impact and success of technologies which arose from that – the microscope, telescope, computer and so on – and how these, in turn, generated exponential increases in our capacity to “perceive”, collate and analyze data.

Recommended: A Hindu Priest Explains How Your Subconscious Mind Can be Reprogrammed

Out of all this a new culture, a new paradigm, a new way of looking at life and cosmos emerged. Materialism was a defining feature of this science.

In this schema, things – including people, animals, and minds – were at their very basis material objects, regardless of what properties or behaviors they exhibited at a macro-level.

All this has been widely discussed by philosophers of science, as have been the many challenges to such a reductionist approach to knowledge. Those challenges have always been around, of course, with perhaps the emergence of quantum physics early in the nineteenth century representing the most pronounced challenge.

And yet even today materialism – and the denial of mind – remains strongly embedded in many of our sciences.

Strawson’s paper argues that any rational take on the relationship between cosmos and mind has to admit at least a “micropsychism”, if not quite the idea of panpsychism (that consciousness is present in all things, to some degree).

He argues that everything concrete is physical and everything physical is comprised of physical ultimates. Conscious experience is part of that concrete reality. Therefore consciousness is an intrinsic aspect of cosmos.

Although I do not specifically define myself as a panpsychist, clearly the idea is quite compatible with the existence of the non-local mind.

Recommended: 5 Ways To Restore The Naural Peace And Quiet In Your Mind

If there is at least a little bit of mind found in all things, it helps to explain how it is that minds can perceive of things that are not readily perceptible with the eyes, ears and other sensory organs.

I believe the latter is now undeniable.

I base that conclusion upon three sources: my own extensive experience with the expanded and non-local mind; first-person insights gleaned from the world’s great wisdom traditions and recorded for posterity; and upon the scientific data which has been gleaned from psychic research for more than a century.

What lies at the heart of the debate is the mind-body problem. Even if one rejects the evidence for psychic phenomena and the extended mind, we still have the issue of how we get consciousness from brains.

A key issue is how to explain why it is that our experience of mind is so utterly different from what we experience when we look at, say, a brain in a vat, or an fMRI scan of neuronal activity.

Clearly, there is something very qualitatively different between brains and consciousness. What exactly does that difference represent, and what is the relationship between these two things?

The question has not been adequately addressed in neuroscience. As Lawrnece Le Shan points out in his wonderful book “A New Science of the Paranormal,” there is an explanatory gap which lies at the heart of the mind-equals-brain model.

We have sensory inputs, we have electrical signals and we got them neurons firing and then… wala! Thought, sensation, consciousness.

Such is one of several very, very big “miracles” that go unimaginably unexplained within modern science.

The other two big, big problems which I can point to are how the cosmos arose out of the nothingness that lies at the moment before the Big Bang; while the third is the puzzle of biogenesis.

How did life arise from lifeless matter? For the last query, reductionism arguably works for the bio-machinery of the organism but fails miserably to account for the rise of consciousness.

Recommended: 10 Signs You Are Experiencing a Recalibration Of Your Mind-Body-Soul System

And after all, the most wonderful and surprising aspect of life is consciousness, at least as it exists in multi-cellular organisms such as we human beings.

An explanation for the emergence of life which fails to account for the origin of consciousness is a bit like an account of airplanes without bothering to mention that they tend to fly. Such “explanations” are ultimately merely descriptions.

Lawrence Le Shan points out an obvious double standard with a common criticism of psychic research.

In the latter critique, it is incredulously stated that research into phenomena like ESP, telepathy, precognition and so on fail to provide an adequate an explanation for how information might travel from one place or mind to another place or mind without

some mechanical process to mediate that transfer (note: the idea of “travel” is highly problematic in regard to non-locality).

As yet there is no adequate explanation, and this remains more than a merely small problem. It begs the question of what the essential nature of consciousness actually is!

And still, the discourse continues without so much as a pause for reflection, hailing His Majesty the Neurone With no Clothes.

Perhaps it is about time that we finally admit that the emperor is totally buck naked – and duly tell him, such that in the long run we save him from further embarrassment when he is informed that his game is up.