Home
SPIRITUAL GROWTH
Creating Energy Shields and When to Use Them 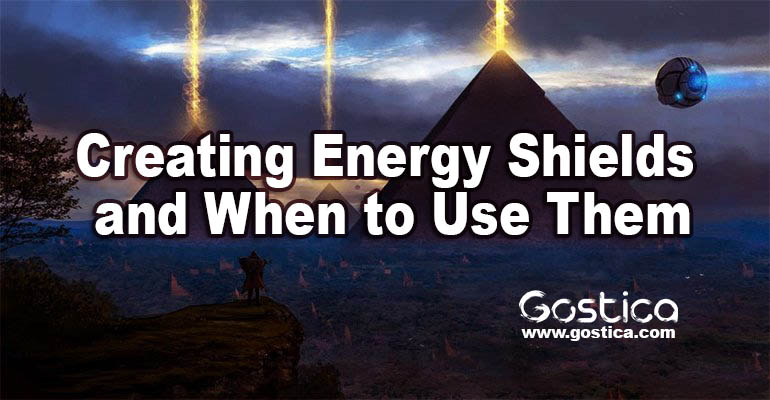 There is a long history of conflict and struggle on this planet. Many claim it is inevitable in life, that life itself is characterized by our achievements in the face of adversity.

The age-old axiom, “As above, so below” is often quoted as the validation for participation in a fight from a spiritual sense. The question you have to ask yourself is; “Doesn’t it take two sides for a fight to occur? If we believe unity is the highest expression of spiritual love, can conflict exist outside the illusions created by the mind’s choices?”

To Shield or Not to Shield

Often it is the belief in an oppressor that creates one. Because a lie you believe is true will affect you as though it’s true even though it is not. This is the reason the High Priest Terry Riley of The Southern Delta Church of Wicca – Aquarian Tabernacle Church would begin his classes on psychic self-defense with the statement, “The best shield is to not need one, to be invisible to attack.” There is an old African proverb which states, “If there is no enemy within, the enemy outside can do me no harm.”

These are to be deeply considered when you feel you are being attacked on a psychic or spiritual level. If there is nothing attacking you, believing there is will still affect you as though there is.

Not everyone is ready to face headlong into their own self-awareness while fearing for their safety, and sometimes there really is someone wishing harm upon you. This is the purpose of shielding.

To provide a safe space for yourself that will allow you to determine if the feelings you are having are coming from beyond your skin or not. If you erect a shield and feel no difference in the attack, it is likely you are creating your own painful experience.

If however, you create a shield around yourself or toward your environment and then notice that you no longer feel the attack occurring you know that you should make a practice of shielding daily until you are no longer under attack.

Shielding should be used as a tool to help you understand what is happening rather than as a reinforcement to the idea of being a victim. You have the power to stop anyone from influencing your energy, and as such you are only a victim to them if you allow yourself to be so.

Recommended: 10 Ways To Protect Yourself From Energy Vampires

How does that work? How is it that you can control that since you cannot make anyone choose not to attack you?

You are the one who controls your own energetic field, but unconscious reactions are still within you, controlling things even if you are unaware of it. The key in shielding is being active about minding your own energy field.

How can you shield? There are many different methods, none of which are actually superior to another, except for the belief in them by the person using them.

Your belief in your ability to manifest control over your own energy is actually the only relevant measure of a shield’s strength. It doesn’t matter whether your shield is a visualization created by an atheist or the prayers of atheist. Does this mean the method is trivial?

No, it does not. It means that the method you choose to believe in and practice is what matters for you. The only holes in it will be the doubt you have of it.

Does this mean if you have self-doubt that you cannot shield? No, there are still the metaphysical mechanics of the interaction between your physical and energy bodies.

You can always choose to cross your arms and legs as this closes your energetic system off from the outside. If you cannot do that, you can go to a place of worship and allow the belief of others to protect you until you feel you can do so yourself.

Your Aura as a Shield

“Many writers refer to a person’s energy field as their aura. This energy field can be made into your ward or shield.” –Kerr Cuhulain

The way to turn your aura into your shield is rather simple. You breathe energy into it, seeing it grew brighter and brighter, such that no negative energy can pierce it.

Doing so is a combination of the energy and physical body meta-mechanics as well as focused intent married together. Another way would be to pray to your idea of the Divine and thank them for protecting you.

Recommended: White Light Protection: What It Is & How to Use It

You can visualize a holy symbol filling your aura blocking any harm from reaching you. You can even surround yourself in a ring of salt, or carry protective gemstones.

Using technique(s) you believe in, are much more capable of protecting you and will be the one(s) that can. Additionally the belief that you always need protection will guarantee you find a reason to need it. Protect yourself when needed, and grow in your own power until you no longer need protection.