Home
SPIRITUAL GROWTH
The Wheels Of Samsara: Reincarnation & Enlightenment Of The Soul 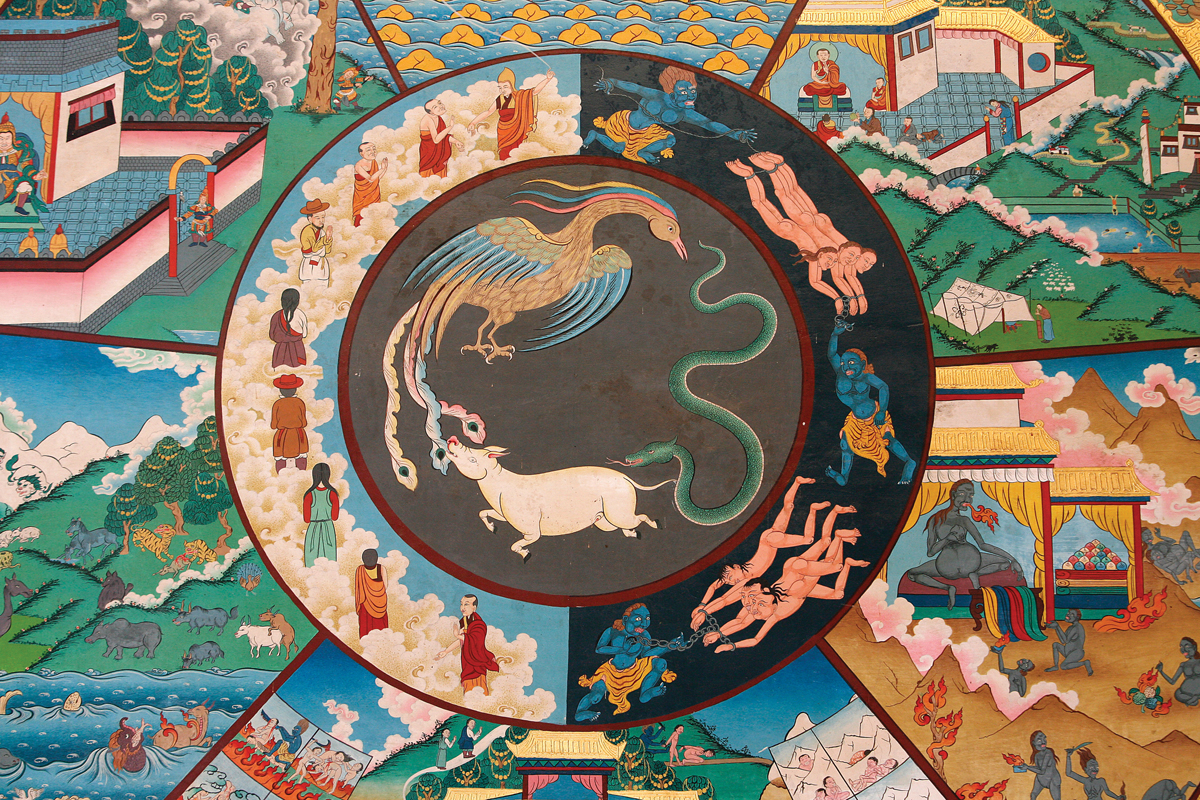 The three unquestionable truths related to the human experience and its nature on Earth are being born, living, and dying, where one certainty is that one day, we are all going to die.

But, different individuals and cultures interpret death differently, which gives it the cyclical character, usually of eternal continuities, or also the ending of consciousness and existence, accepting that, after all, there is actually nothing left beyond it.

Many people perceive death and life as experiences, and for them, the Samsara Wheel brings an excellent insight into the spiritual phase of those that incarnated here on Earth.

The concept that Buddhists and Hindus created reaches the Westerners during the twentieth century’s second half, expressing the death and life’s wheel, which is actually rebirth through worlds.

It is, in fact, an idea such as reincarnation and karma, where an awareness which undergoes an experience right now also had other different lives during the past.

Those concepts which are dealing with Samsara’s Wheel may also have various names; however, among them, the most exciting analogy is going to be the Law of Return or Action and Reaction, right where we have the responsibility for the impacts our actions are going to have on other people and on the world.

Also, any phenomenon, action, or process that living comes from also causes consequences and causes disturbances which have to be internalized and adjusted in that particular soul.

In fact, it is Samsara’s Wheel: reincarnation cycles which permit the spirits to actually live various experiences and experience subjugation, power, wealth, poverty, illness, health, and also experience every positive or negative aspect which the incarnation in various life aspects may offer.

In every possibility, the spirit will acquire knowledge and will be closer to what the truth is, to God, or also to the so-called Higher Self.

Knowing this concept, we will have the ability to analyze our lives and even delve in the inner universe.

Also, discovering which of the situations which will present themselves into our lives will be karma, or a chance to work or improve our spirit’s characteristics, or rescue, making difficulties allies.

Often, all those complications we meet have an identical source, and also present themselves just like patterns in our lives.

Self-esteem is one such example. Our spirits should work on our self-esteem. After that, our spirits will express themselves as jealous and insecure.

Then, the soul will be born in the family, which isn’t favoring her self-esteem and self-worth, engaging in a destructive relationship, constantly living identical emotional patterns.

Then, these traits are directly going to influence every sphere of the spirit’s material existence, like work, love, family, and social relationships, bringing the chance to new problems to strengthen the self-esteem of a person with the help of self-improvement.

This happens without realizing that every single thing that generates frustration in their lives has identical origins. The result is never going to change, no matter of the factors’ order.

The existence of Samsara on some other planet.

According to paranormal specialists, there are numerous inhabited planets, forms of life, and evolutionary levels right in this Universe, which we tend to inhabit. Also, the laws which govern the stars are directly connected to Samsara.

Certain ascended planets during certain points in the journey could transit in the light, or release the Karmic Law. There are speculations that several planets already live in the so-called Law of Love or maybe in other laws which we aren’t conscious of or capable of visualizing.

Such places don’t possess Samsara as their inhabitants have pure levels of consciousness. Various celestial bodies, which have denser energies and are the home of more primitive types of spirits, could offer learning experiences through rebirth and birth.