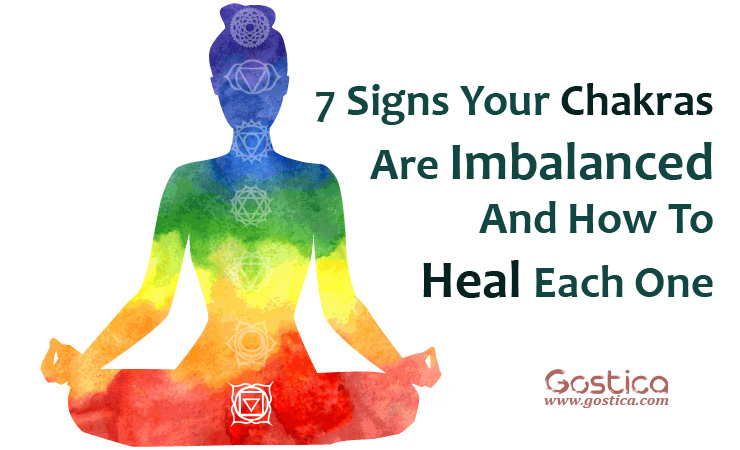 Weaknesses in emotional behavior or various physical dysfunctions might have something to do with your chakras. Here are 7 signs your chakras are imbalanced.

While dealing with the common cold or occasional illness isn’t something to be overly concerned with, the persistence of these issues hints there may be an underlying problem that can’t be treated with rest or medication. Chances are, you might be dealing with unbalanced chakras.

This article highlights the common signs of imbalances of the chakra chart and tips on actions you can take to realign these energy centers.

Eating disorders, excessive negativity or cynicism, heightened greed, and uncontrollable feelings of insecurity are all common signs of an imbalanced root chakra. Rebalance your root chakra by:

Take a long, warm shower while being mindful of embracing and loving your physicality

Failing to see yourself as a desirable, attractive person or finding it difficult to open yourself fully in a relationship are the biggest indicators of an imbalanced sacral chakra.

While meditation and envisioning an orange lotus around your sacral chakra are effective ways to get your sacral chakra in check, you can also find balance by including things like oranges, melons, coconuts, and other sweet fruits in your diet.

Recommended: 5 Ways To Clear Your Energetic Field And Balance Your Chakras

Lastly, by surrounding yourself with water – the sacral chakra’s element – you can benefit from the relaxation needed to facilitate the flowing of emotions.

Signs of an imbalanced or weakened naval chakra are often some of the most noticeable, as things like digestive, liver, and stomach problems, chronic fatigue, and a heightened sensitivity to rejection and criticism are typically notable. Fix this weakened naval chakra:

Furthermore, over-loving to the point of suffocation is also a common sign of a weakened heart chakra. Find balance again by getting out into nature, going out of your way to show forgiveness, do your best to perform “random acts of kindness” on a regular basis, and reconnect with old friends.

As one of the most noticeably imbalanced chakra, signs of disparity often include throat ailments, facial problems, pain in your neck or shoulders, weakened willpower, and difficulty with self-expression.

By vocalizing, singing, humming, and chanting, you can start to open and re-balance your throat chakra. Also make an effort to speak the truth, share your feelings, thoughts, and ideas, stop judging yourself and others, and practice regular deep-breathing exercises.

Are you feeling extra moody, volatile, or hormonal? These, along with things like hearing loss, sinus issues, and an exaggerated imagination, are common signs of an imbalanced third eye chakra.

Recommended: This is How Your Chakras are Related to & Affected by the Foods You Eat

Realign this chakra with meditation, sufficient sleep, aromatherapy with essential oils like frankincense, lavender, neroli, and juniper, and introduce purple and blue foods like red onion, cabbage, blueberries, red grapes, blackberries, and more into your diet.

Last but not least, an imbalanced crown chakra often displays symptoms of depression, inability to learn, hypersensitivity to light and sounds, fear of being alienated, and issues with self-awareness or self-knowledge.

Find balance in your crown chakra by meditating and helping others. Also, in choosing to love yourself, you can fully love and accept others. Furthermore, by choosing love, you’ll benefit from releasing the tensions of other chakras as well.