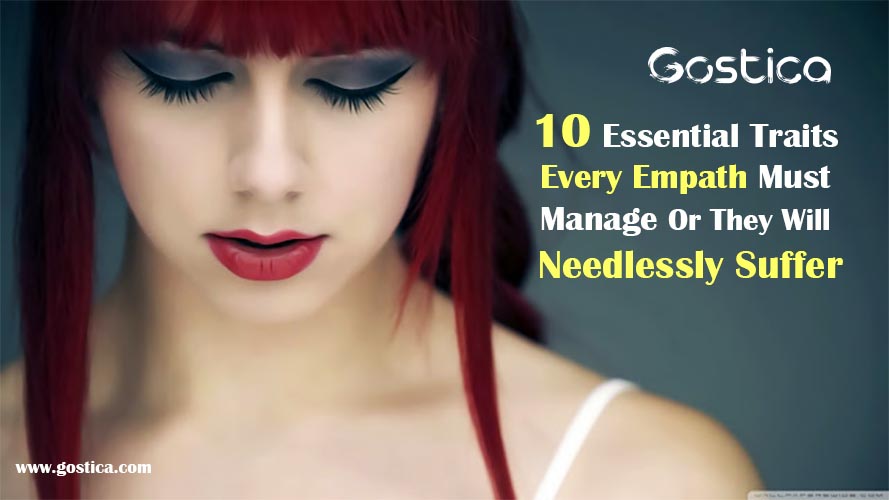 Empaths are basically people who feel the world too much.

They have a heightened empathy and a hyper perception of emotions, no matter if they are conscious of this or not.

You might know someone who is absolutely drained among large crowds of people, it might be someone from your family, or even you. This is characteristic for empaths.

In fact, there are 10 essential traits that each authentic empath possesses but needs to learn how to manage.

If they leave these traits out of their control, the world might break them!

They absorb other people’s energy.

Because this is their essential trait, empaths could not help it. But once they’re aware that the emotion is not actually their own, they can step back and prevent themselves from further exhaustion.

Recommended: If Your Child Shows Any of These 15 Signs They Are A Natural Born Empath

They are highly intuitive.

Empaths feel things on a psychic level. They can tell what others feel by looking at them.

They can even feel the intentions behind the words of others and can tell if they are lying. Even if other people don’t tell them, they know what is in their minds.

Sometimes, they might even get angry at someone just because they’ve read the intentions behind something superficially innocent, and they can’t explain it to no one.

They are drained spending too much time around people.

Empaths cannot help but absorb the emotions of other people. Such flow of energy is emotionally and mentally draining.

Each empath needs to install a healthy way of recharging in their lifestyle. For most empaths that’s spending time alone, watching movies or reading books.

Recommended: 6 Types of Psychic Empaths: Are You One of Them?

They naturally make other people open up to them.

People, even strangers, can sense when an empath is there for them to listen to their woes and difficulties.

It’s something in their look, their body language, and coherence in energy that other people find familiar and comforting.

While helping others is an ideal goal in itself, it does not mean that empaths have to give their energy to every person they meet.

They are humans too who need to have their own life and establish strong boundaries.

They do not have many friends, but few really close.

Empaths connect with people on a much deeper level than others. They avoid having too many friends because for them it’s either BFF or an acquaintance. There is no in between.

That’s why they do not consider too many people as their real friends but have only 1 or 2 really strong ones. The depth of their friendship is something beyond measure.

They prefer living in a location surrounded by nature.

Empaths prefer to be surrounded by nature because they connect with the vibration of their surroundings.

A city, a lively area, a crime area, a highly populated place or busy neighborhood is not an ideal place for an empath to live.

Empaths, ideally, need to locate themselves in a country or a neighborhood where the population is not too dense. A place nearby a forest or a mountain is perfect.

Recommended: All Empaths Have THESE 4 Rare SUPERPOWERS, Whether They Know it or Not

They are sensitive souls.

Empaths don’t like to see suffering in others because they feel it.

They feel it too much! Sometimes they might even feel the physical pain that others are going through.

When they see violence in TV, they either change channels or walk away. And when they are confronted with an unpleasant scene in a room, they choose to leave when they can’t help it.

They can sense when others are lying.

Empaths just get it when others are lying. They only couldn’t prove it because they have no proof other than their inner knowing.

Because of this, it’s easy for empaths to know who to trust and who to avoid.

This gift is what makes empaths attract broken people. Their emotional state is always in a state of receiving, like an emotional punching bag.

Broken people desperately need to spread the negative emotions and other people usually avoid such encounters.

However, an empath listens and absorbs. This is where empaths need to be aware enough to establish a healthy boundary.

They put aside their own problems.

Empaths get to the extent of ignoring their own problems and emotions. Carrying the emotions of others as well as their own is an empath’s biggest challenge.

If they can’t manage to separate other people’s emotions from their own, they are prepping up for an imminent breakdown.

Empaths have to learn to take care of their own issues first, so they can actually help others.

Optimum health is an essential part in bringing an empath’s unique gifts to the world.

Recommended: 5 Ways For Empaths To Protect And Reclaim Their Energy